iOS 4 was released yesterday, and it's already jailbroken. However, iBooks only works in iOS4 on devices jailbroken with PawnageTool 4.01 and redsn0w 0.9.5b5-4 or newer. For some reason I couldn't get PawnageTool to work so I used redsn0w.

The images below are captured from my iPod touch 2G. 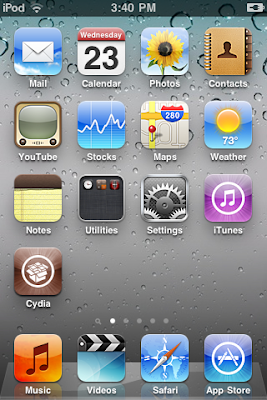 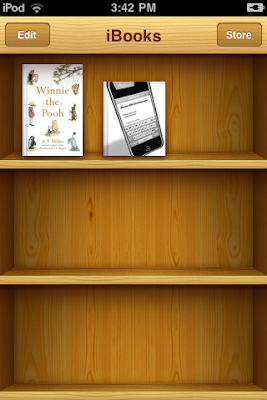 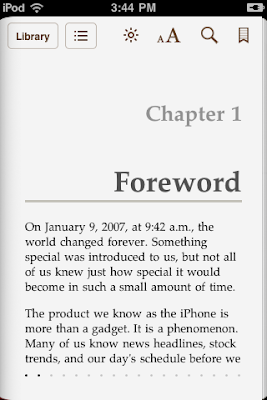 The iPhone ebook in the image above is the iPhone SDK Development book in epub format that I bought from The Pragmatic Programmers that I also used in the Amazon Kindle review previously.
Posted by FRiC at 5:15 PM No comments:

More Internet censorship going on in Thailand as the government blocks more and more websites for absolutely no good reasons whatsoever. Most recently, for some unknown reason, they decided to block the entire Vimeo site. However, this time, instead of blocking the IP address like what they did in the Google blocking fiasco, they decided to simply block it by the URL, "www.vimeo.com". Fortunately, like all good websites, "vimeo.com" also works for accessing the site, and the geniuses at the government failed to block that URL. So to access your favorite Vimeo videos in Thailand, simply use http://vimeo.com/.
Posted by FRiC at 7:15 PM No comments: 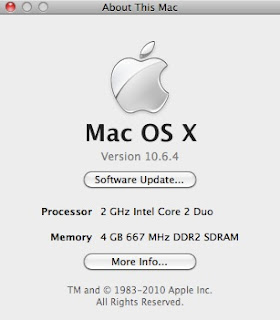 10.6.4 just came out this morning and I quickly updated. The reason was that since installing 10.6.3 two months ago, I've had this really bad problem where when I resume from standby, the screen's back light doesn't turn on and I have to manually change screen brightness to make it light up. Sometimes though, even doing that doesn't work, and I have to close the lid and re-open, sometimes multiple times, until the screen works again.

After upgrading, the problem seems to have disappeared.
Posted by FRiC at 11:50 AM No comments: 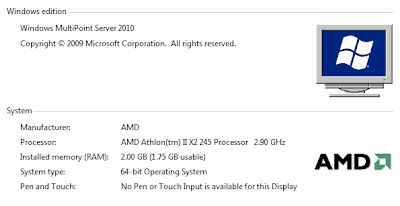 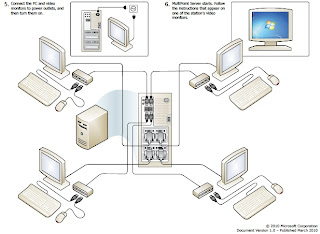 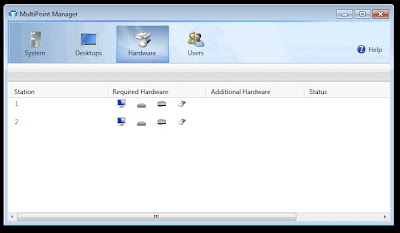 Finally, one issue I ran into is that since MultiPoint Server is based on Windows Server, many programs that detect the operating system due to either OS differences or (more likely) licensing issues, won't install. So even if the academic institution saved money in hardware purchases, they may need to purchase different software designed to run on a server OS.
Posted by FRiC at 10:24 PM 8 comments:

Recently we've starting moving to Windows 7 x64 clients at work, especially for the newer computers. Of course, we still have the Windows Server 2003 R2 that I installed earlier. However, my users complained to me that they couldn't print when logged on to the server remotely, eventhough we've been using this setup since last year and we've not had problems before.

After looking at the system logs, I realized that the printer driver was missing. The Windows Server is a 32-bit system, while our new clients are 64-bit. Not a problem, so I installed the x64 printer drivers onto the server. Still not found...

After fiddling some more, I noticed the server has our Canon printers listed as "Canon iP3600", which is the driver that came bundled with the printer, while the Windows 7 clients have it as "Canon Inkjet iP3600", which is the driver that came with Windows. And since the names don't match, driver installation didn't work. I also couldn't just install the Windows 7 drivers onto the server though, since terminal services expects drivers to be pre-installed before they can be used.

This would probably have been easier if I had set my server up with a print server role, but I didn't, and I didn't want to kick all my users out to install a role. So I fired up the Remote Administration Tools for Windows 7, and added the x64 printer driver that came with Windows 7 onto the server.

That still didn't work, then I realized since the server is actually 32-bit, I need to install the 32-bit drivers and not the 64-bit drivers. Unfortunately, the 32-bit drivers only comes with Windows 7 x86, and there didn't seem to be any other way of doing this, short of running the Remote Administration Tools from a 32-bit Windows 7 installation.

Finally, after another hour of installing Windows 7 x86 just to install a printer driver. I now have four different printer drivers on the Windows server for the same printer, and everyone's happy.
Posted by FRiC at 5:26 PM 1 comment: