After the last post I started thinking about calibrating my Stryd on outside runs (also indoor runs). I wrote that I had let it auto-calibrate when I first bought it a few months ago and it was an impressive 100.0, but I hadn't done any calibration recently due to doing most of my runs on the treadmill. Last weekend I finally found some time for an outdoor run and I blasted through what was supposed to be a slow recovery run with a PR. I was so used to running on the treadmill and Stryd giving me a slow speed that when I went running in the park I was going so fast and I kept telling myself to slow down because it was a recovery run, and I still ended up with a PR. And yes, I made sure the Stryd was set to indoor runs only, and the distance was correct because I was running on a marked course in a park.

So after the run ended I decided to calibrate the old Stryd by turning on the auto-calibration function and running the park again. Yeah, I know I'm supposed to do calibrations on a track and run on the line, but the park has markings and I've ran it for years and Stryd used to be perfect on it even at a calibration factor of 100.0. Stupidly enough this time it auto-calibrated itself to 108.0! Now I'm more confused than ever. 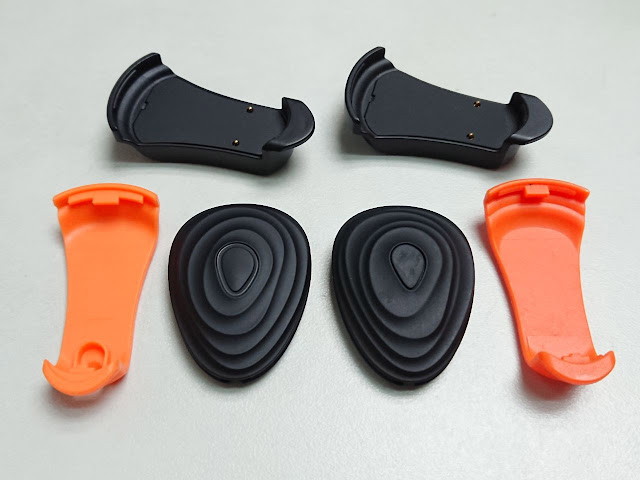 But since I had a new Stryd with Wind detection on order at the time, so I thought I would try calibrating everything again when I receive it. It supposedly has better motion sensors so it might be more accurate. Well, I'm disappointed to say that the Wind version reports an even slower speed than the old one. I've manually set the calibration factor to 109.0 for now and will go for a run in the park and let it auto-calibrate after the most recent tropical storms subside.

For now I'll talk about the outer appearances for a bit. My old Stryd is a Model 11 [Rev 3] and the new one is Model 14 [Rev 4]. Rev 3 is the one sold near the end of last year that wasn't packaged with a wireless charger but instead comes with a wired USB charger.

Rev 3 and Rev 4 chargers are identical. One of the deciding factors for buying the new Stryd was whether the charger can be shared. But when I contacted Stryd about this, I couldn't get a straight answer out of them, they kept saying it comes with a charger! You don't need to worry! It comes with a dedicated charger! But it's easier for me if I could share accessories like chargers and cables. Wonder why they couldn't just give me a simple answer.

The "terrace farming" design of the Stryd looks nicer on the new one. I always thought the very top terrace on the old model looked a bit lop-sided. The clip was a little surprising, the old clip is more rounded on the bottom while the new one is completely flat, you can see this from the shadow in the picture. This is quite problematic for me since the new one's flatness digs onto the top of my foot. I'll probably just have to reposition it from the usual location.
Posted by FRiC at 12:43 PM No comments: