The pen is mightier than the keyboard

When I started taking notes using Moleskine notebooks a bit over two years ago, one other thing I had to do was get a good pen to go with the notebook. Even though I didn't mention it at the time, I bought the supposedly hugely popular Pilot G-2 pen. I liked it so much I even bought the G-2 Pro a few months later.

Unfortunately, I don't know if it's the weather in Thailand or if it's bad usage (I write very softly), but so far all of my G-2 refills except one have died on me, and each time it happened it was the exact same symptom: the ball of the pen came out from the tip (see photo) when I let someone borrow my pen just for a few seconds. Until finally it happend to myself. While I was taking notes during a meeting the pen just suddenly stopped working and the tip came out. I wasn't even doing anything special. 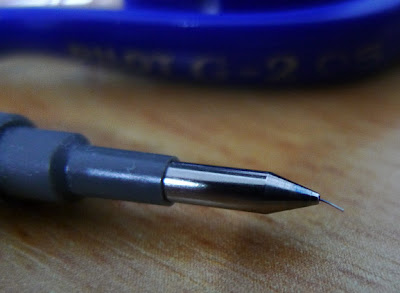 So I went to the office supply place to pick out a new pen without reading any reviews, and I picked up the Pentel Vicuna. A quick web search shows that it's new and appears to be quite popular. Strangely enough, even though only the dark blue colored body is supposed to be blue ink, mine is the light blue / violet colored body, and it even says black on the barrel, has blue ink inside. Unfortunately, even though when I tested the pen at the store it was really smooth and the ink looked good, but when I actually took notes during today's meeting, a lot of ink globs were visible and lines were uneven. 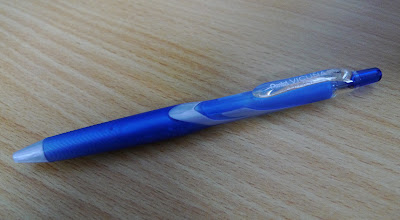 While searching online to see if others are experiencing the same problem I have with the Pilot G-2. I came across a whole bunch of sites "teaching" people how to swap the G-2 refill for a Mont Blanc refill. I thought the whole idea of using the G-2 pen is for the smooth writing and ink quality. Perhaps the grass is greener on the other side? I also see a lot of people complaining that Mont Blanc refills dry up very quickly, but Mont Blanc rollerball pens are capped, so I wonder how many of those people complaining are actually using Mont Blanc refills on other pen bodies such as the retractable Pilot G-2 body? 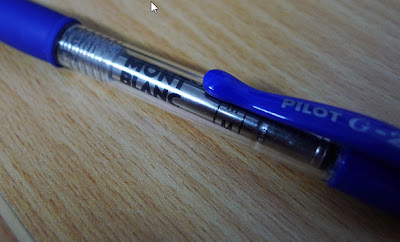 I've also been using Evernote more frequently lately. Maybe one day these traditional pens (like cameras) will be called analog pens, and I will finally be taking notes with digital pens.
Posted by FRiC at 9:00 AM No comments:

Technical PDF on the iPad 2

After using my iPad for the past half year as my main reference tool, I discovered the biggest problem was that GoodReader is just not that fast for searching through files, and "flipping" is also quite slow with the page needing to refresh. (In fact, this was the original problem I had with attempting to use the Kindle as a reference tool.)

The slowness problem have been resolved with the iPad 2's faster A5 CPU. The iPad 2 is also lighter making it much easier to hold with a single hand, even for the 3G version. The iPad 2 is also much thinner and weighs much less than my Windows Server 2008 R2 Unleashed

book. Besides the faster CPU and the cameras, there's really not that much difference for my uses, so I'll wait for the iPad 3. 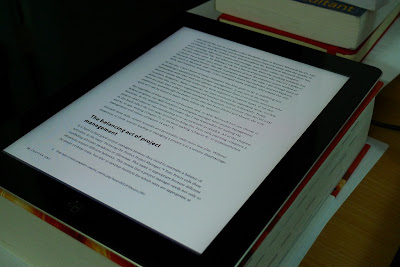 From zero to hero

Computer books get outdated so fast, but I still buy them once in a while even though I have an iPad just for reading ebooks. It's just awesome to have (almost) my entire library in ebook format and always have them with me, but they're somewhat poor as a reference tool if you need a whole series of instructions (such as doing an installation) and need to keep going back and forth between a number of pages or even chapters, and searching is really slow on the iPad. I've yet to try PDF reading on the iPad 2 (since I don't have one), but the faster processor could help with both issues.

even though I already bought the ebook earlier. I've always bought Microsoft's own books when it comes to Windows servers and I wanted to get Windows Server 2008 Inside Out

but for some reason it wasn't updated for 2008 R2. I know that R2 doesn't have that many new features, but it's nice to have the latest edition and to prevent a new edition from being released the instant I buy the current edition. The book is 1600+ pages and has thin pages similar to the pages you normally find in the Bible, so physically the book is not that thick, but it's really heavy and I get a free workout every time I pick it up. 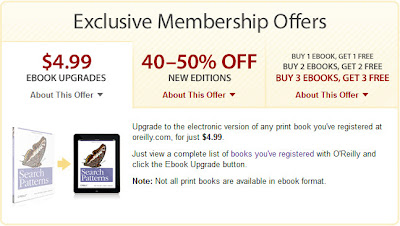 It's not always a good idea to buy the ebook then the paper book. O'Reilly has an offer where if you already have the paper book you can register it then "upgrade" the paper book to an ebook for only $4.99. Of course, nothing stops you from registering a book that you don't actually own, but hey, honor counts when it comes to ebooks.

Before ebooks and the term n00b were invented, I uesd to buy lots of books, and I kept almost all of them. Running Microsoft Windows NT Server 4.0

was the one that got me started in all this.
Posted by FRiC at 12:18 PM No comments:

Now that Sandy Bridge is out in force, I've been seriously thinking about buying a new notebook. I went backwards a bit earlier this year when I stopped using the MacBook and switched to an older ThinkPad X61 with Core 2 Duo, and when I play with friend's newer Core i notebooks, the Core 2 Duo just feels slow.

However, one of my most frequently used programs is VMware Player, which is far more dependent on RAM than on raw CPU power. I have a virtual network inside VMware that consists of a domain controller and multiple Windows client versions that I use to do my testing, and having only 4 GB of RAM sucks when I need to open more than two virtual machines. I decided I should either get a new notebook so I can get cheap DDR3 RAM, or hold out by getting expensive DDR2 RAM or getting an SSD.

So... while searching online for some RAM and SSD prices, I found to my dismay that to take advantage of SSD speeds, I needed a BIOS hack for the X61 to enable SATA II speeds. The same BIOS hack also has a function called Dual-IDA that forces IDA on both CPU cores. Intel Dynamic Acceleration is the precursor to Turbo Boost that Intel heavily advertises on the Core i5 and i7 CPU's. But back in the Core 2 Duo days, they've already had this technology. The basic idea is that if you're only using one CPU core, it automatically overclocks by one multiplier level (i.e., 200 MHz on my Core 2 Duo T7100 CPU). The BIOS hack forces this overclocking on both cores all the time. So my 1.8 GHz T7100 would constantly run a 2 GHz. The equivalent CPU would be the T7250.

The BIOS upgrade turned out to be really hard. The ThinkPad BIOS upgrade utility for older notebooks don't work in 64-bit Windows, so I had to burn a bootable CD. The bootable CD upgrade program didn't work with the original Lenovo DVD-ROM drive that came with X61, it just says no CD-ROM drive found. So I searched around for one of those WinPE rescue discs, which also didn't work since they don't seem to detect that I have a battery, and the BIOS flash utility doesn't work if it doesn't detect a battery. 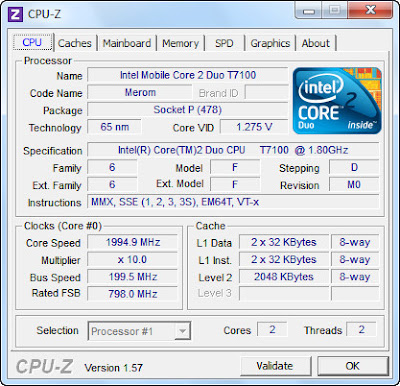 Sigh. Finally I found an old hard drive lying around. I swapped the hard drive in the X61 and installed 32-bit Windows 7 just to do the BIOS upgrade. With the BIOS upgrade and IDA enabled. My Windows Experience Index for the CPU went from 4.9 to 5.0, and CPU-Z shows the CPU clocked at 2.0 GHz. 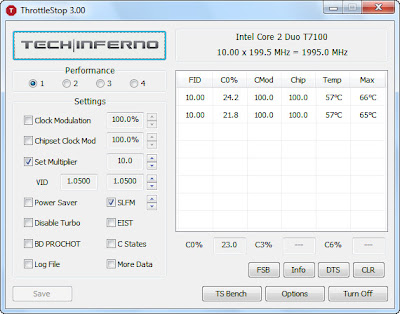 After flashing the Dual-IDA capable BIOS, I had to use ThrottleStop to actually enable it. ThrottleStop also allows adjusting the CPU core voltage to more manageable levels. Normally, the core voltage dynamically adjusts itself according to the CPU speed. But since the speed is now locked at 2 GHz, it would be always using maximum voltage. Eventhough the core voltage is still fixed, but I could adjust it down, and the image above shows that it's fixed at 1.05 V. Even though the CPU now runs hotter at idle, but when the CPU load is higher, the temperature is cooler since it's locked at 1.05 V. 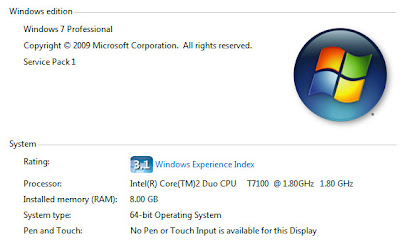 In addition to using the Dual-IDA BIOS, I decided to go for the DDR2 RAM. The RAM was really really expensive, but it's still cheaper than having to buy a new notebook just to use the newer DDR3 RAM. VMware Player now screams with 8 GB of RAM, so I'm happy again. At least I can put off buying a new computer for at least a year, or until the X61 breaks down.
Posted by FRiC at 7:25 PM 1 comment: