Time is such a strange thing. I was cleaning up my pile of junk and suddenly saw my dusty Linksys NSLU2. I was wondering why it's sitting in the pile and whether OpenWrt would be available for it to make an easy print server. A quick search on the Internet revealed that I had written about OpenWrt myself 2.5 years ago.

I had completely forgotten that I had done this. I guess with Mom being sick and being overworked I had just lost track of things. Incidentally, this is why I haven't written much on my beloved blog. Since I'm in need of more print servers now, I decided to upgrade it to the current version of OpenWrt.

I booted up the NSLU2 and sure enough, it still has the exact same version of OpenWrt "Backfire" 10.03.1-RC5 that I installed back in 2011. The current release version, "Attitude Adjustment", was released in April 2013. So I downloaded an image for the NSLU2 and proceeded to upgrade it. The upgrade can only be performed using the Sercomm utility and not from the OpenWrt web interface, so I had to boot up my VMware image like before to perform the upgrade. 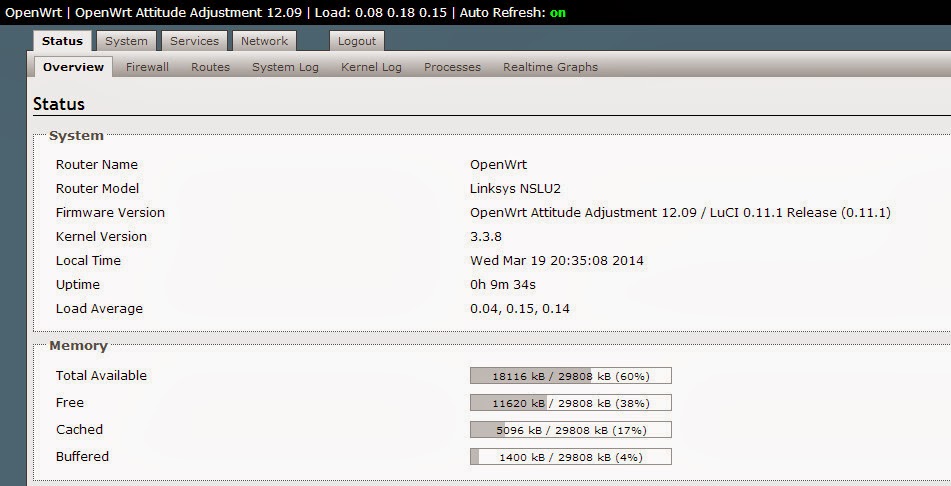 In Attitude Adjustment, the first USB printer device is /dev/usb/lp0, so the device name has to be edited. After that, everything works just fine.

Stupidly enough, after finishing the upgrade, I remembered why the NSLU2 wasn't being used. I actually let my users test it, but they didn't like it since it had to be manually powered on if power was lost. The NSLU2-Linux site actually has a page specifically for this issue. However, this may not be an issue any more today, as the new Epson printers that we've started using recently do not automatically turn themselves on when a print job is received. We used to use Canon printers that has this feature, but Canon stopped making small sized printers so we stopped buying them.
Posted by FRiC at 8:56 PM No comments: