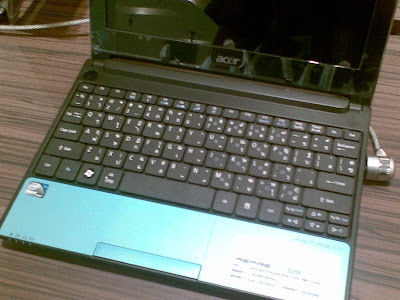 The picture above taken with my phone is way too blurry to read the spec list in the palm rest, but it's the Acer Aspire One D255 with the newfangled dual core Intel Atom N550 CPU that was just announced last week, and it's already in stores this week.

Stupidly enough, right next to the new D255 was the older D255 with the Atom N450 (1.66 GHz, single core), 1 GB DDR 2 RAM, otherwise identical specs, selling for exactly the same price. I asked why anyone would want to buy the older model, and the salesperson looked at me strangely and told me that 1.66 is faster than 1.50, and DDR2 is cheaper than DDR3 so it's more affordable to upgrade. Right.
Posted by FRiC at 8:30 AM No comments:

Early this year, I wrote about using Toodledo (referral link) to manage my tasks. I use the online version inside my web browser, and I also access it using Pocket Informant, and it was all working wonderfully, until I discovered, much to my dismay, that the web version, eventhough written in AJAX, does not automatically refresh itself when new tasks are added from another location, such as from Pocket Informant, or from another browser.

This is quite important to me since I don't want to have to open the Toodledo website each time I want to look at my tasks. It actually took me quite a while to notice this deficiency, since normally I always work from the web version, and in fact always keep it open in an tab in my web browser. But this is exactly how the problem happens, Toodledo will only refresh its tasks when loading the website, or when changing tabs, or when 'r' is pressed. The refreshed time is shown on the lower-left corner.

I was also on the verge of pushing out Toodledo to my team when I discovered this problem. I kept wondering, if sharing was enabled, but there's no auto-refresh, would I or my team member notice that tasks have been updated, unless they keep manually refreshing?

After a few weeks of pressing rrrrrrrr, I moved on to Omnifocus.

P.S. Incidentally, Remember the Milk for iOS now has limited (once per day) syncing even without buying a Pro account! Still no subtasks though.
Posted by FRiC at 4:30 AM No comments:

Since installing Ubuntu Netbook Edition I've actually put my old EEE PC 701 to great use. I went on two trips without having to carry my MacBook with me. I only needed to access my mail and use Skype, so the little EEE PC was all I needed.

While researching which distribution to install earlier, I also came across Jolicloud and EasyPeasy. I chose UNE at the time since it was just released, while Jolicloud was still in beta, and EasyPeasy was based on a previous version of Ubuntu.

Since my EEE PC really doesn't have anything important on the SSD and I don't really care if the SSD dies by overuse, I decided to give all of them a try. (Note: the screenshots below are not taken from the EEE PC's 800x480 screen.)

Jolicloud has a completely different home screen that's not based on UNE. The strange thing about Jolicloud is that you have to "activate" your installation, and then it automatically syncs the applications installed from the application directory between your computers. I don't really see how useful this is. I mean, who has multiple netbooks?

Thanks to Plasma Netbook, Kubuntu Netbook Edition has by far the best looking desktop that's closer to a... er, desktop rather than a netbook specific look. Strangely enough, even though it's supposed to be designed for netbooks, it requires 3D capability, and I guess this is why it's really slow on my EEE PC.

EasyPeasy looks exactly like Ubuntu Netbook Edition, except it's green instead of brown, and has proprietary third-party applications such as Skype and Picasa installed by default. The most surprising thing about EasyPeasy is that it fixed the 1.9% battery bug. Due to all the extra installed programs, EasyPeasy takes more than 3 GB when installed.

Lastly, I tried Leeenux Linux. Leeenux Linux's idea is to create a tiny installation (less than 1.5 GB when installed) by using only GNOME and GTK+ applications. So you get GNOME Office applications like AbiWord and Gnumeric instead of OpenOffice.org. The idea is completely opposite of EasyPeasy above. Leeenux Linux has some annoyances such as having a non-obvious default keyring password (the password is '1'). Not a big issue, but it means I had to look it up instead of being able to guess the password.

In the end, I decided to use EasyPeasy on my EEE PC. I removed all the applications and games except for Firefox and Skype and got the installation down to a slightly more manageable 2.5 GB. But 2.5 GB is still a lot of space to run just those two programs. When I got my EEE PC in early 2008 I installed Windows XP as well as Microsoft Office XP in less than 2 GB. Linux shouldn't be so bloated... so I downloaded deborphan and tried to remove all stuck packages, and that got it down to 2.4 GB.

My EEE PC only has 512 MB and EasyPeasy automatically created a 200 MB swap partition. I guess I could get a bit more space if I installed more RAM and completely got rid of swap.
Posted by FRiC at 9:45 PM No comments: 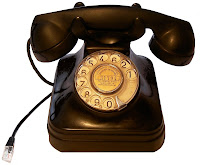 One of my users complained to me that her Skype contacts couldn't hear her. We had recently upgraded her computer to Windows 7 x64 so I figured it must be a bad setting in the recording device. So enable microphone boost, turn up the recording volume, make sure the microphone actually works, make sure the latest version of Skype (4.2 as of this writing) is installed, it all looked good, but her contacts still couldn't hear her.

Skype has a great built-in way to test calls by simply adding or calling the user "echo123". I called echo123 from her computer, and all I got was silence from my side. I tried yelling into the microphone and turned out I could hear myself in the distance. So the microphone actually worked, but it was just really really soft.

The strange thing is, all other recording applications worked fine, such Live Messenger or Google Chat, so it must be a Skype thing. As usual, Google searches only turned up recommendations that I've already tried, and it was quite obvious that the people giving "solutions" never experienced these problems themselves. However, I did learn that I could change the default recording format, but that didn't work for me either.

It turned out that the motherboard (ASUS M2NPV-VM) has a SoundMAX AD1986A chipset and Windows 7 automatically installed drivers for it, but Skype has compatibility problems with the standard drivers. After installing this driver on the ASUS FTP site everything worked as expected... but since I had mic boost turned all the way up and recording volume at max, I nearly blew my ears out.
Posted by FRiC at 9:50 PM 1 comment:

I bought the highly acclaimed Panasonic Lumix LX3 early last year. I spent months convincing my SO that the LX3 is a wonderful little camera, showed her plenty of sample shots from the Internet, until she finally agreed to let me buy it. Of course, right afterwards, it became hers.

The LX5 was announced last week to be released later this month. Maybe she can have her LX3 and I can have my LX5. 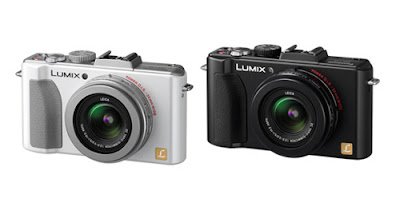 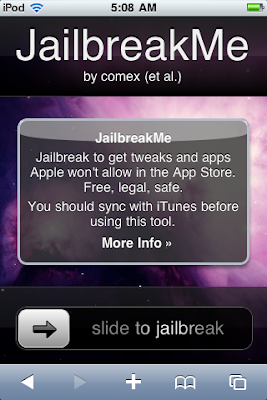 Just visit www.jailbreakme.com on your iDevice to jailbreak. Can't get any easier than this! (Yes, this works on the iPhone 4, and iOS 4 for all iPhones or iPod touches.)
Posted by FRiC at 5:08 AM No comments: