With the imminent release of iPad this weekend, iTunes has been updated to 9.1 and supports iBooks. 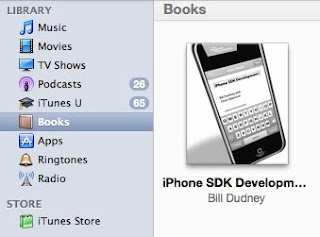 As mentioned on the Apple website, EPUB files can be dragged into the iTunes Library. The above shows my iPhone SDK Development ebook in the Library. Apparently this is for syncing to the iPad only, since iTunes doesn't provide a way to read the EPUB files.
Posted by FRiC at 7:22 AM No comments:

Just installed. I hope it would magically make my networked printers work. But probably not. 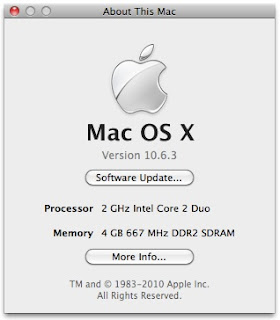 Microsoft has released an update that removes the requirement of hardware virtualization when running Windows 7's XP Mode. This is such welcoming news. I always get people asking me why their brand spanking new computer couldn't run XP Mode, and they often sound like this.

"Hey, I downloaded Windows XP Mode program that's supposed to allow me run all my old games on my new computer, but it says something about hardware visualization is disabled."

"Dude, it's virtualization, and it's disabled because you bought a low-end computer with a low-end CPU."

"It's gigabytes, and your Core 2 Duo CPU is hardly top of the line."

"Ahhh! My new computer sucks and Bill Gates sucks!"
Posted by FRiC at 9:35 PM No comments:

Getting rid of Windows

After almost a whole year of using OS X, I still need to keep running VMware Fusion because of one single program: NetOp Remote Control. For everything else that I need to use, I have either installed the Mac OS X version of the program, or found programs with equivalent (sometimes better) functions. NetOp actually makes a Mac version, but only the "Host" side of the program and not the "Guest" side. I need to use the Guest side to remote access my server and to spy on my users.

I was reading somewhere about Valve's announcement of OS X support for their games when I saw someone mention CrossOver Mac. CrossOver is a commercial version of Wine which allows Windows programs to run natively inside Linux or OS X. I've used Wine ages ago when I used Linux, but it was really primitive back then. It should've been obvious that Wine had been ported to OS X, but I never thought to check.

After searching a bit, I downloaded and installed WineBottler, which is Wine packaged ready to run on OS X, then started the NetOp installation. But the NetOp installer keeps bombing out with an installation error. I thought maybe the newer version of NetOp was the problem, but trying all the different versions only made it bomb out with different errors! So I thought I would try using CrossOver for Mac, so I downloaded a trial version, and the NetOp installer bombs out with the exact same errors, just proving that CrossOver indeed is a commercial version of Wine.

Fortunately, NetOp itself has a built-in option to create an installation free or "USB application" of itself. It's found in Tools -> Copy Guest to removable media. So I used that to create a copy of the program, and moved the whole thing into Wine's Program Files folder. And it worked right away. For some reason though, I get some garbage graphics when connecting to one of my servers eventhough all my servers have the exact same hardware configuration and NetOp versions.

Quite unfortunately, after getting everything to work, Activity Monitor tells me that Wine and the required X11 subsystem actually uses more RAM than VMware Fusion. But it's nice that I don't need to boot up Windows XP just to use a single program. But come to think of it, I always have VMware Fusion running. In fact, while testing this, I restarted VMware Fusion, and it tells me that a new version is available. But the new version was out since about three weeks ago, and I hadn't exited out of VMware Fusion at all in all that time. (As of this writing, my MacBook has an uptime of 41 days. The last reboot was when I had trouble ejecting a CD and I had to force eject during boot.)

But even with the extra memory usage, I have NetOp running "natively" inside OS X, and it does work a bit smoother than having to swap back and forth between OS X and the virtual Windows XP.

Here are the screenshots for using NetOp to control one of my remote servers. First, running under VMware Fusion.

And running under Wine. This is from that one particular server that's having graphics issues. The last bit of every line of text is cut off.

While I was typing this. Kindle for Mac was released. One less reason to use Windows! 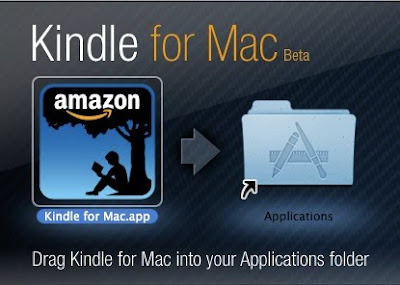 I borrowed one of the new ThinkPad X100e's to check it out and compare it with the IdeaPad S10 I have. The X100e has a matte screen, but it's not completely matte unlike the S10. I don't have my ThinkPad T60 handy, but the S10 is more matte than the T60, and the X100e is somewhat shinier than the T60. The S10 is showing a lot of fingerprints!

While playing with the X100e, I discovered that when it's running on battery power, the screen loses a lot of contrast. It's most obvious when running Excel 2007 since the cell grid lines become almost invisible. Once the adapter is plugged in, the grid lines become sharp and contrasty. I had to give back the X100e so I didn't get a chance to take a photograph, but it's pretty bad.
Posted by FRiC at 9:30 AM 2 comments: