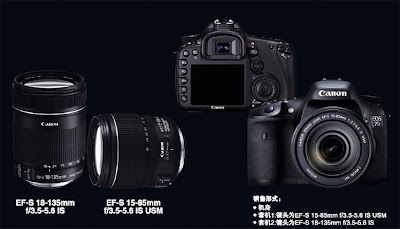 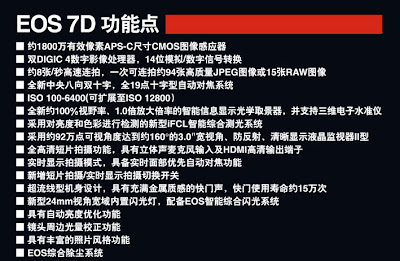 Meet the Man behind ThinkPad 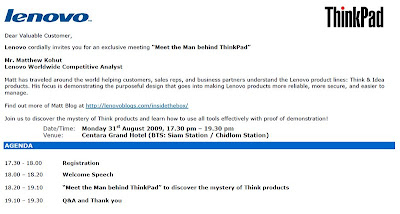 I'm meeting Matt Kohut of Inside the Box blog next Monday. I should probably leave my MacBook at home.
Posted by FRiC at 7:00 AM No comments:

We've been using Google Apps at work for years, ever since the service was first offered. Unfortunately, I was never able to force^H^H^H^H^Hconvince the old^H^H^Hsenior management people into using it, as they're all comfortable with using Outlook Express or in some cases, Thunderbird, on their notebooks.

I still can't believe how bad Outlook Express (and even Outlook) is. I got bitten by Outlook's 2 GB limit per mailbox so incredibly many times that I have all the tools and the fixing steps memorized by heart. Unfortunately, all the senior management love Outlook Express because it has a simple way to click and select contacts that you want to send emails to.

My prayer has been answered, in the form of the contact chooser. 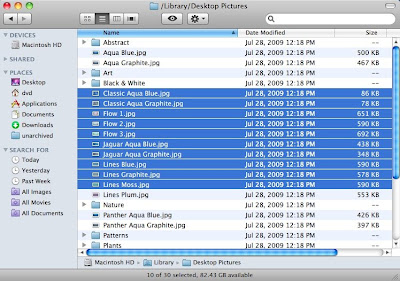 This feature is so insanely great it demands a separate entry all by itself. In 10.6 Snow Leopard, selecting multiple files by holding down the shift key and moving the cursor around using the arrow keys now works as expected. i.e., it works in the same way it works in every other OS or application.

If you're still using 10.5 Leopard (or maybe earlier), try selecting multiple files by holding down the shift key then press the cursor keys. The highlight can only grow from the original file by expanding out. If you accidentally went past the last item you want to select, there's no way to de-select the extra items by moving in the opposite direction. You have to either do the selection process over again, or pick up the mouse and command-click on the extraneous items to de-select them.

But in 10.6 Snow Leopard, the file selection bar is now controlled by the cursor keys. So if you overshoot the last item, just press in the opposite direction and the extraneous items are de-selected. Magic!
Posted by FRiC at 6:45 AM No comments: 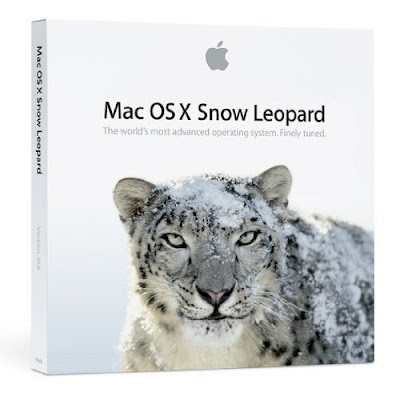 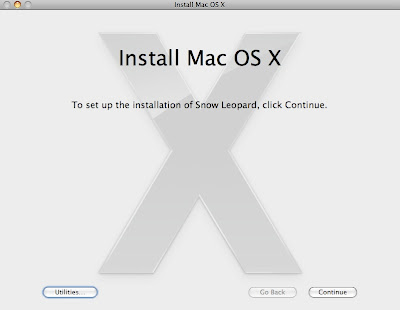 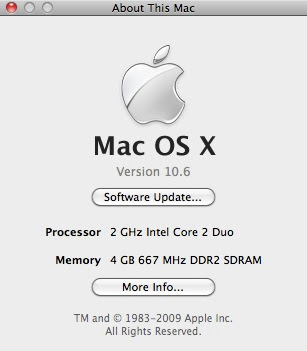 One issue I noticed immediately is that with the new IME, Pinyin input for both Simplified Chinese and Traditional Chinese now have the same icon. I had to Show Input Source Name in order to know which Pinyin I'm actually using. 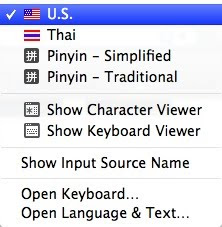 Pressing Command-Space bar (by default) is still used to select the previous input method. But if the Command key is held down a moment longer, a new transparent pop-up menu for selecting the input method appears. The menu is incredibly annoying, and there doesn't seem to be any way to disable it. 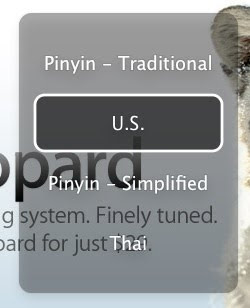 I ordered a new ThinkPad T400 at work for my programmer. It comes with the 1440x900 WXGA+ with LED backlight. Eventhough the Lenovo website doesn't seem to have WXGA+ LED as an available option, but I did a parts lookup and it indeed is WXGA+ LED. Oh, and the WXGA+ screen is coupled with the Intel 4500 integrated graphics and not the ATI discrete graphics.

Putting it next to my T60 SXGA+ (1400x1050) completely puts it to shame. The T60 SXGA+ screen does handle documents better though since it's much taller. The T400's screen almost makes me want to go back to using ThinkPads. 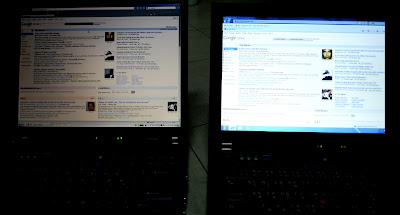 It seems that changing the settings in m0n0wall didn't help a lot. The apartment manager called me up again and said instead of 10 users calling in per hour to complain, now 10 users calls in every two hours. I did more searching and found that spontaneous reboots under load on the ALIX appears to be a known issue. Plus m0n0wall's firewall states can't be changed even if I run it on a PC, so I finally decided to switch to pfSense.

I installed pfSense on a PC with 2 GB RAM and gave it a state table size of 200,000; and on another ALIX board with 128 MB RAM, which I left the state table size at the default of 10,000. Unfortunately, during testing, I found that for the 2.0-ALPHA version, once I enable the captive portal, it says the gateway is offline and can't connect to the Internet. So I decided to go back to a more stable version (1.2.3-RC2), and let the apartment complex stay with the user login system for now, and go for the voucher system later. I also had to flash the ALIX with BIOS 0.99h to resolve a boot problem. All this took about an hour.

So I drove out 100 miles again to replace the two ALIX m0n0wall boxes with the PC and the ALIX pfSense.

And I remembered to take photos of the whole setup this time. 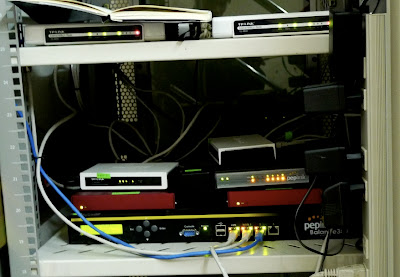 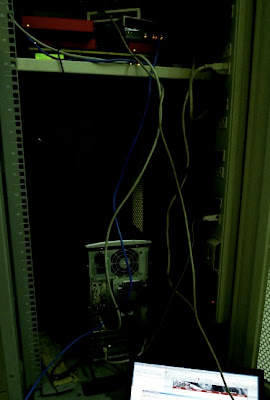 Success! 24 hours of uptime! Previously, I couldn't even get 10 minutes of uptime with m0n0wall during peak usage. This screenshot came from the ALIX box as the platform type is nanobsd. 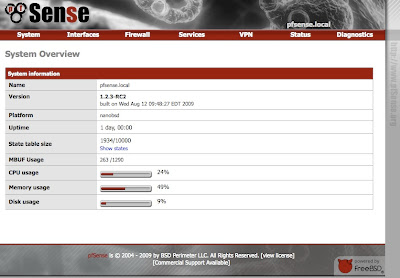 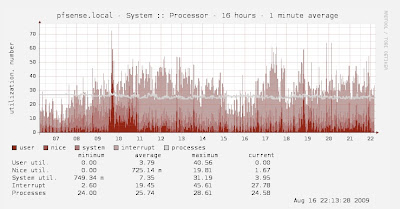 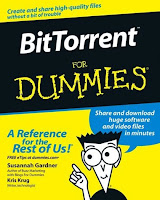 I talked about using m0n0wall as a captive portal in an environment with an extremely large number of users earlier. From what I could see remotely at the load balancer, the system appeared to be running fine, since I could see all the WAN links being used. But the manager of the apartment complex called me up to tell me that users have been complaining that they get logged out of the captive portal, and they have to re-input their passwords. This often happens in the evenings when usage peaks.

I asked the manager if the users all called at the same time to complain about this, which could indicate that m0n0wall had crashed and rebooted, thus kicking all users out from the portal. The manager wasn't sure, but he said that he gets calls every single evening.

It turns out that there still aren't that many users using the system, but those that are using, are hogging the bandwidth by running P2P software. I searched a bit and found that m0n0wall has a hard coded 30,000 connection limit (firewall states), which can't be changed unless the kernel is recompiled. It also appears that when the limit is reached, m0n0wall crashes. Hmm.

I could switch to pfSense and run it on a PC, which seems to not have any issues in this area since it has a configurable maximum states option based on the amount of RAM installed, but the current released is tagged ALPHA-ALPHA, which scares me a little bit. Or I could switch to some other system not based on m0n0wall, but I really like the captive portal, and the apartment complex people also intend to use the vouchers in m0n0wall.

So I changed the TCP idle timeout value, and gave minimum weight to P2P connections using the traffic shaper. I also remembered to set m0n0wall to allow remote access, so I don't have to drive out again if all I needed to do was look at users and change some settings.

But I forgot to take photos of the hardware setup again.
Posted by FRiC at 4:30 AM No comments: 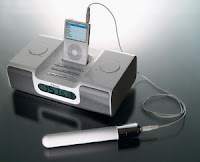 Last weekend I upgraded the hard drive in my MacBook to a 7200 RPM one and it started vibrating. There's one good thing about the vibration though. My MacBook's Apple logo always lights up when the lid is closed and I unplug the mouse. I've always wondered if that means the hard drive gets powered up when that happens. Now that I can feel the vibration, I now know that the drive is turned on when that happens, so I know not to move the notebook until the breathing light goes on for a few moments.

I read somewhere that screw tightness could affect vibrations. Looks like another disassembly. Or maybe I should wait for the 6 GB upgrade?
Posted by FRiC at 6:45 AM No comments:

I used Carbon Copy Cloner to perform the drive cloning. 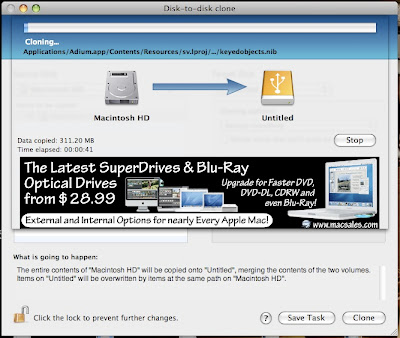 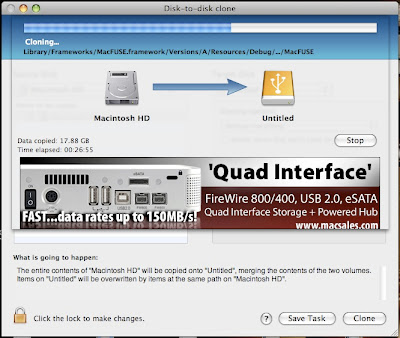 Carbon Copy Cloner appears to show the progress bar according to number of files and not by size of the total transfer. The last few bits on the bar took forever when it was cloning my virtual machine and disc image files. 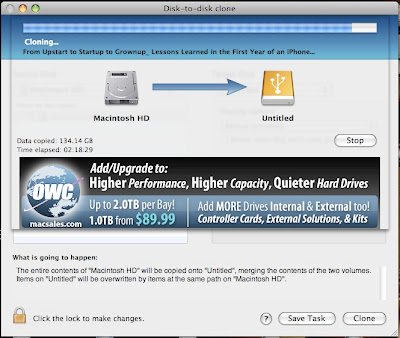 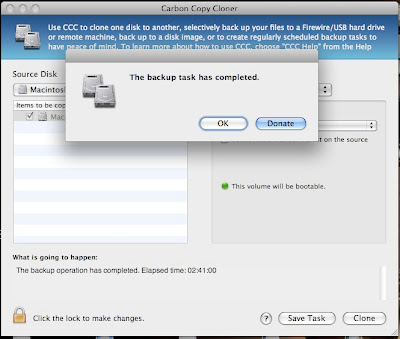 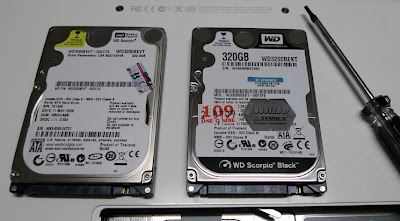 I don't have any benchmarking programs for hard drives and I don't really care for drive benchmarks, but I timed the boot time and it didn't change at all. It still takes about 90 seconds from powering up to the desktop appearing. But VMware Fusion and the virtual machines load noticeably faster. Larger apps like Xcode and Microsoft Office also load in less bounces. Unfortunately, the new drive seems to cause a very slight vibration on the palm rests, but I could live with that.
Posted by FRiC at 10:28 PM No comments: