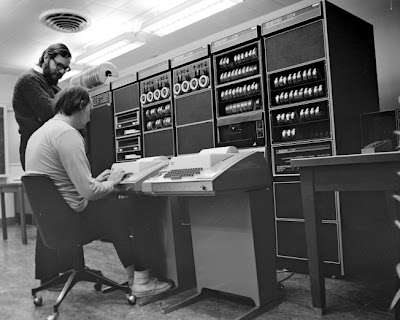 Two technological giants have passed away within a week of each other, and few have heard of Dennis Ritchie.

When I got my first computer in grade school, the first programming languages I learned were naturally BASIC and Pascal. When I was in high school and got serious in programming, I taught myeslf C and Smalltalk. Eventually, I went to collage to learn real computer science. Strangely enough, I was taught Modula-2 and assembly language (the joke was, we write VAX assembly language with Sun, and write 68K assembly language with VAX) while in classes, but outside of classes, I taught myself Visual Basic and some C++. (Java and Python and Ruby and .NET all came after.)

Although I never became the Ferrari-driving hotshot demigod coder that I wished to be when I was young, and I rarely do any coding now, but what I've learned both by myself and in school have had huge impacts in my thinking and working style. Thank you, Dennis.
Posted by FRiC at 10:37 AM