Official word on the streets is that the social network censorship that happened a few days ago was due to ISP routers unable to handle the load since everyone is at home reading news. Riiiiiiiiiiiiiiiight. I believe you. And pigs can fly too. 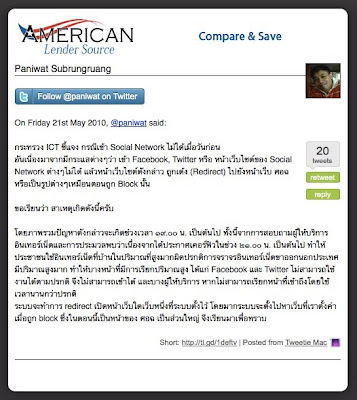 Earlier when I thought this blog was also being blocked turned out to be that the government was blocking access to ghs.l.google.com, which is the address that Google Apps based services (including blogger.com) resolves to. However, since ghs.l.google.com is on a round robin DNS system, and they were only blocking some sets of IP's, so it appeared that the blocking is random and goes on and off. (And the government is using this as an excuse that the ISP's can't handle the load.) But this actually due to the fact that some IP's being blocked and some aren't. Facebook.com and other social networking sites were affected in the same way.

One of the mysteries I encountered at work is that some of my users when traveling to China to our subsidiary would have trouble accessing our Google Apps based mail, while others have no trouble whatsoever. This is quite difficult to debug when China is about 2,000 miles away.

Last month when I finally had a chance to go to China myself, the first thing I did after arriving and getting Internet access, was to open the company's email. ... and, nothing. A quick look proved that I was being blocked by the Great Firewall.

Or in case of Google Apps, instead of going to, say, www.capothai.org, which was a case of the right hand blocking the left hand, simply go to sites.google.com/a/capothai.org/www

Hi!
I landed on your blog after googling "capothai.org". A few days ago, I wasn't aware of the existence of this Centre for the Administration of Peace and Order. Thanks to their blocking of many of the sites I was used to reading, I am not only aware of them now but also tend to describe them as a pain in the back. Today I realised I can't even access proxies (either by choosing them on Google or using Foxy Proxy) and invariably land on their beautifully designed page. Needless to say, I am pissed off! Is there a solution to access to information? Any proxies which aren't blocked yet? Thanks in advance.