After trying openSUSE and Fedora and getting frustrated, I was almost ready to give up. Surely if people are trying to get Linux onto desktops, it should be easier than this? All those people that are saying Linux is ready for personal use must be delusional, or have really simple needs.

Anyway, my next was Ubuntu. Ubuntu is by far the most popular Linux distribution with a huge commercial backing. The installation screens of Ubuntu is also different from others in that it highlights Ubuntu's features instead of showing technical messages that most people probably won't understand. 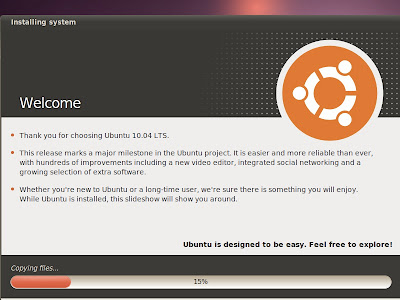 Ubuntu has multi-lingual support built-in, but maybe because they don't have a lot of Asian developers, their selection of pre-installed input method are more than strange, to say the least, and the most commonly used Pinyin input, ibus-pinyin, isn't available by default, and none of those Chinese input selections in the screen below worked in a useful manner.

You might also think I'm easily discouraged. The thing is, I have no problems with using Windows or OS X in my daily work. I don't think Bill or Steve are the devil, and I use the right tool for the right job. I can easily learn to compile my own kernel or drivers, but I want to see how difficult it would be for an average person to get Linux going, without getting all frustrated. 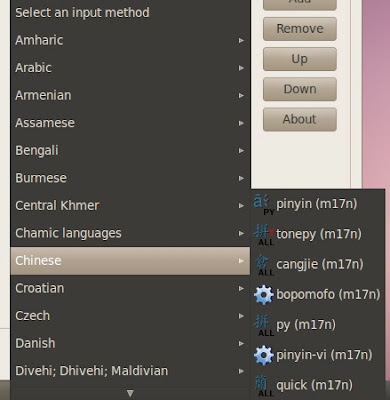 Like Fedora, Ubuntu supports brightness and volume OSD out of the box, as well as Wi-Fi and Bluetooth toggling using Fn-F5. Trackpoing scrolling and sensitivity can be installed and configured the same way as Fedora.

The big surprise was for Active Protection System, which I couldn't get to work in Fedora. In Ubuntu, both tp_smapi (called tp-smapi-dkms) and hdaps are available in the repo. After installing them from the repo, APS worked right away without additional configuration.

I was almost going keep Ubuntu when I went to uninstall Evolution. I don't use a desktop mail client, so Evolution is no use for me, but when I tried to remove it, Software Center also wants to uninstall ubuntu-desktop as well, which is probably not a very good idea. Evolution is just too integrated with Ubuntu to make a full and clean uninstallation possible.

Next and final in queue, Linux Mint. 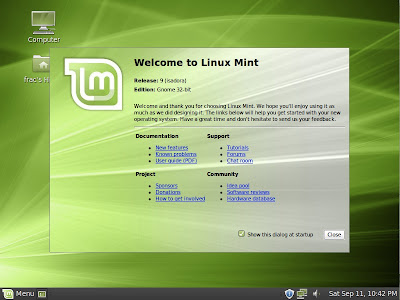 Linux Mint's Software Manager is a lot like Ubuntu's Software Center. But it adds community reviews and stars, which sounds like a good idea at first, until you see the reviews for programs like Adobe Reader which is really useful for enterprise users like me, but typical "fanbois" would hate. I think this is Linux Mint's only drawback, and I wish there's a way to use the Software Manager without seeing those amateur reviews and scores. 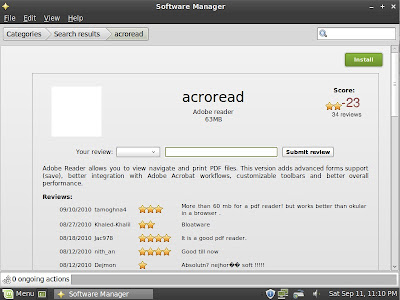 In conclusion, I've been using Linux Mint for a couple of weeks now. As of this writing Ubuntu 10.10 is out, and I imagine a new version of Linux Mint would be coming soon.
(To be continued...)
Posted by FRiC at 6:00 PM

Personally I'm using a slightly older version of Crunch Bang on my main computer. But when I'm introducing a distro to someone new to linux I use Mint. It's easy, it looks nice, and it has things like flash player and mp3 codec already installed. It really is hard to beat.