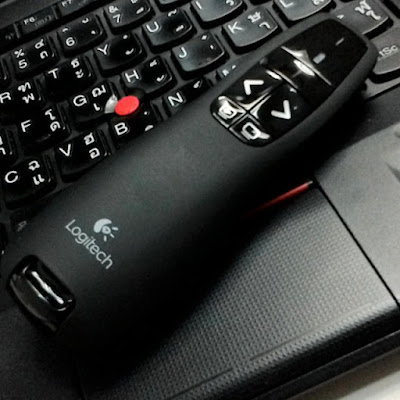 PowerPoint remotes are one the most ovepriced things on the planet. I could get a whole set of wireless keyboard and mouse for less than the price of a wireless remote with three buttons. Sure, I get an integrated laser pointer with the remote, but laser pointers are such cheap things they shouldn't bring up the price of hte remote.

I do quite a bit of presentation these days, and it's always a pain to hover over my notebook to advance to the next slide instead of being able to walk around and mesmerize the audience with my charisma and wit. Fortunately, a few weeks ago I discovered a Chinese-made wireless remote in a local shop that doesn't cost several arms and legs. Surely enough, the first one I got had stiff buttons with bad contacts that took several presses to register a single press. I took it back to the shop and got a second one. The second one still had stiff buttons (I realized then that's how it was designed), but at least each press would register correctly, so I was actually very happy with it. It's a really simple remote with just three buttons: PgUp, PgDn, and laser pointer. It doesn't even have a power switch, but the buttons are stiff enough to not be pressed accidentally. (Funnily enough, I discovered Amazon.com sells this particular remote

However, PowerPoint remotes are like crack, so after using the cheapo remote for a while, I finally ended up with the Real Thing (tm). The Logitech Wireless Presenter R400. There is also a more expensive "Professional" Presenter R800 with Green Laser Pointer and vibrating alarm. But I tested some green laser pointers and they only proved to be a distraction.

Officially, the Logitech R400 (and R800 as well) don't work with Mac OS X. The reason is quite simple really. The presenter is seen by newer Macs as a regular keyboard, but the buttons on the remote are hard wired to send out F5/ESC (start/stop presentation), "." (blank screen), PgUp, and PgDn; which are the standard keys for PowerPoint for Windows. The remotes are not magically designed to work only with PowerPoint for Windows, they just happen to be mapped that way because those key presses are the de-facto standard, which is why they work fine for Windows and even Linux. But OS X people prefer different keyboard shortcuts, so for Keynote or whatever other OS X apps that don't follow the Windows style standard, you can either change the default shortcut keys using Keyboard Shortcuts from System Preferences, or re-map the remote to send the correct key presses. This post and KeyRemap4MacBook (great name!) teaches you how accomplish this.

In fact, even though I do use Windows and PowerPoint, I still need to remap the F5/ESC key since it's such a pain in the butt to accidentally press the start/stop button during a presentation, and then accidentally press it again to start my presentation all over from the beginning! (They should've at least made it Shift-F5 to resume presentation from the current slide.) The solution is to use HID macros, which can detect key presses originating from different keyboards (or really HID devices) and re-map them accordingly. So I can re-map the F5/ESC on my R400 to send out something besides F5 and ESC, without messing with my actual F5 and ESC keys.

Oh, while writing this, I discovered that Epson finally has 64-bit USB display drivers for their projectors. They used to only have 32-bit drivers. Using a USB cable to connect to the projector is far better than connecting using a regular VGA cable.
Posted by FRiC at 9:36 PM