We bought new computers that only support Windows 10. I tried to install Windows 7 on them but it didn't work very well, besides, we could no longer get Windows 7 licenses, so we finally started rolling out Windows 10 to the users. I immediately ran into issues joining them to the old Windows 2000 domain. Google search returns Windows 10 no longer supports Windows 2000 domains and old servers need to be upgraded. Hmm, I distinctly remember joining Windows 10 computers to the domain since some managers have had new computers since last year, it's only the users are getting Windows 10 right now.

After more searching I found sites saying that security policy needs to be modified. I also don't remember doing anything like that previously. I checked my notes and I had nothing on issues with Windows 10. After some brain wrangling I figured that it must be something about SMB. It turns out that SMBv1 is not installed by default only on newer versions of Windows 10 as described in this article. We did new installs using 1803 and SMBv1 is no longer included which was why it worked last year and no longer works now. 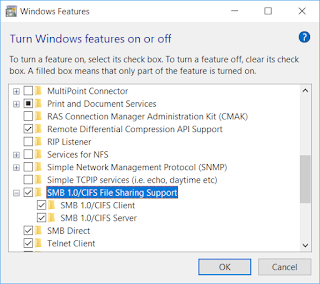 Adding SMBv1 back is just a matter of turning on a Windows feature, and after that Windows 10 can be joined to the Windows 2000 domain without issues.

End note: yes yes, I know that old servers should be upgraded, we have some new servers but they've yet to be put into production mostly because old programs need a lot of time to be ported. I hate it when people tell me old hardware or software are no longer supported, just upgrade.
Posted by FRiC at 3:20 AM