I'm not a very fast runner so all the new-fangled running dynamics are wasted on me. However, I like having foot pods on my shoes, especially now that I have a new watch that supports linking to multiple sensors of the same type. Meaning I can have one foot pod on each pair of shoe I have. The reason I like foot pods is to get real time pace. As I just said I'm not a fast runner, so getting pace from my watch instead of running "by feel" is much more useful for me.

However, I was no longer able to get cheap foot pods locally, and as the running fad boomed, running accessories got even more expensive than before. But while out looking at running shoes one day, I came across the Milestone Pod. I was a little surprised since I had never heard of the Milestone Pod before seeing it in that store. The box seemed to suggest that it needs a dedicated app, but a quick online search revealed that it can be used as a realtime foot pod using Blueooth. For reference the Milestone Pod is only 1/3 the price of the Garmin SDM4 foot pod locally.

I decided to let my SO have a go at the Milestone Pods since the app is so pretty and has automatic shoe mileage tracking. Unfortunately, in real life the Milestone Pod doesn't work so well with her Fenix 5S. I know the 5S has trouble with sensors, but we never had issues with the older ANT+ foot pods. And some of the trouble I see online seem to suggest that it's due to distance. She's not that tall so I didn't think it would be a problem. Actually, at a indoor track where we often run, the pod wouldn't connect at all. It's probably due to interference from the Bluetooth lap counting system they use, but it's just completely disappointing and I wish I had bought ANT+ foot pods instead. 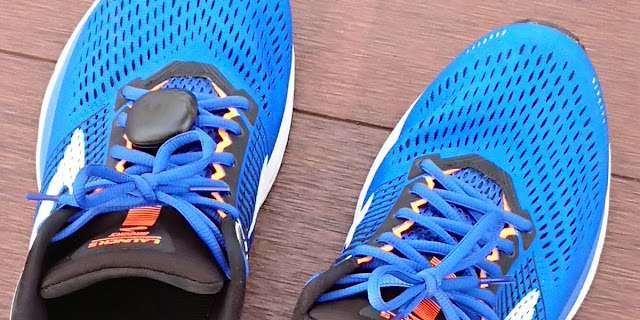 After a lot of fiddling I decided to swap my ANT+ foot pods with her and I took both of the Milestone Pods for myself. I have the Forerunner 935 which works somewhat better, but I notice even with the 935, a lot of times I look at the pace while running the field is showing blank, and a lot of times after the workout I find the cadence field to be erratic.

Milestone Pod's support people suggest the reason I was having issues was because I used both the Milestone Pod app and my Garmin watch to calibrate the foot pods. They suggest that I should disable the watch's calibration and set the calibration factor to 100.0, and only use the Milestone Pod app to calibrate the pods. Unfortunately, I find the MP app to be unrealiable and it would keep going back and forth between calibration values. On one run it would be way too fast, but after calibration the next run it would be way too slow, rinse and repeat. Finally I decided to delete the app entirely and only rely on the my watch's auto-calibration, which works much, much better for me.

Update: I kept having more and more issues with cadence on the Milestone Pod, until finally the cadence would completely disappear when I pause. However, the Milestone app still records the cadence perfectly. This time the MP support people suggest that the battery may be too low for broadcasting BLE, even though it's still reading medium-high in the app. I decided to change the battery and sure enough, that fixed the cadence problem. I remembered reading somewhere that the MP can eat through batteries, so I checked the official specs and it indeed says four to six months. Also places like Zwift support says battery on the MP may be enough for other devices, but may be too low for Zwift.

So yes, I'm tentatively in love with the Milestone Pod again. But let me go out for a few more runs and see if the new battery works out.
Posted by FRiC at 11:15 AM