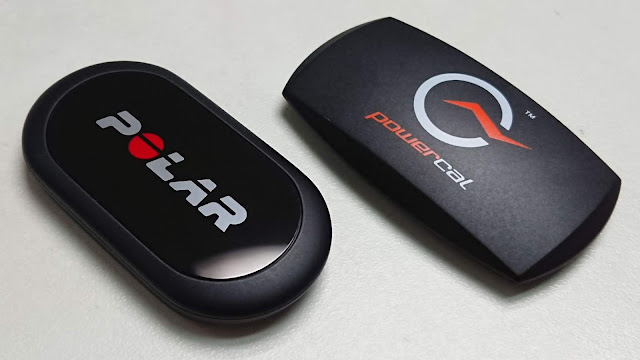 I got a PowerTap PowerCal Dual ANT+/BLE (what a mouthful) recently to use with Zwift. I have a Concept 2 rowing machine and only noticed Zwift because many Concept 2 users were asking for rowing capabilities in Zwift.

Zwift is a virtual biking training environment and requires either a bicycle power meter or a bicycle trainer with speed and cadence sensors. I don't have any of those since I'm not a cyclist and don't plan to be. I tried connecting my Concept 2 rower to Zwift using various hacks and found Zwift to be really fun, but converting the rowing motion to biking just didn't seem right to me, so I tried looking for ways to connect a gym spinning bike to Zwift. After a little research, I discovered that I can simulate a power meter by using the PowerTap PowerCal, so I bought one immediately.

The PowerCal is a heart rate monitor device that works as a power meter by estimating the power / wattage using heart rate and outputs the power reading using ANT+ and BLE. Of course, it's not just a simple conversion formula, but also takes other factors such as how fast heart rate climbs up or drops down and also times of workout since heart rate will creep up as time passes. These are probably done using heart rate variability (HRV) which is the variation between each heart beat.

One quirk of estimating power from heart rate is that normally when you stop pedaling on a bike, your power should be 0, but since your heart can't stop beating estimated power from heart rate would be completely wrong. But the PowerCal formula or maybe it's how HRV works, when you're stopped and heart rate is falling rapidly, the power goes really low or goes to 0. However, it doesn't always go to 0 so it's annoying. Zwift could've implemented a simple software fix that if the cadence sensor is 0 then power should also be 0. Of course, that would require a cadence sensor...

One other issue with the PowerCal is that the power output isn't very stable since heart rate and HRV can't be stable, so workouts in Zwift where you have to maintain a certain wattage is really difficult or impossible to do. The screenshot below shows the result of a pre-programmed workout where I'm supposed to maintain something like 200 W for 5 minutes, then 100 W for 5 minutes. Since I can't really control my heart rate, so even though I did the workout "correctly", the power fluctuated too wildly and Zwift kept prompting me to keep the power within range, and I couldn't receive any stars for the workout.

However, for stable riding such as free riding or even racing, the PowerCal works really well. Since getting the PowerCal a few weeks ago and creating a new Zwift account, I've reached level 13 so far and have ridden up the Alpe du Zwift twice. (I got the Lightweight Meilenstein on the second ride up. Bwahahah! ) Even though I don't have a real power meter to compare my efforts with, my Alpe du Zwift time is 77 minutes and using Strava to look up the overall time from all riders, the time is comparable to my general poor fitness level.

Obviously, the PowerTap PowerCal is no replacement for a real power meter, but it works really well on the spinning bike (or even regular exercise bike) in the gym. Personally I'm not a cyclist and never will be, but I enjoy working out on the spinning bike in the gym for cross training, and using Zwift just adds more fun to it. Without the PowerCal there would be no way for me to use Zwift at all.

Most of the reviews I read on the net say there's no way a power "guesstimator" can be a replacement for a real power meter and give really low marks for the PowerCal. While it is true that you need a real power meter or a trainer for serious training, but for a general user or a beginner who just wants to play with Zwift and doesn't want to invest in a bike and trainer yet, there are no easier or cheaper options. I think it's a really great choice for me since I already have a Concept 2 indoor rower and I already do a lot of running, I just don't have the budget or space to invest in a trainer and a bike that I will never ride outdoors. I think the only professional review that doesn't simply dismiss the PowerCal as completely uselss is DC Rainmaker's review.

Stupidly enough, with all the places saying the PowerCal is not a replacement for a real power meter and that it should not be used with Zwift, the Zwift online store sells it (only the Bluetooth version though, not the dual ANT+/BLE version). Unfortunately, Zwift shop recently changed their policy and doesn't ship internationally any more. And with PowerTap being acquired by SRAM/Quarq the PowerCal's future is bleak.

PowerTap never published the formula for their power estimation , but there is a similar Garmin Connect IQ field called HR to Power that does the same thing by converting the heart rate and recording it into a FIT file. I compared the output between the PowerCal and the HR to Power IQ field and discovered that due to smoothing and compensation for initial lower heart rate when first starting to workout, the HR to Power IQ field actually works much better. But unfortunately since it runs on Garmin watches there's no way to output the power reading.

Maybe it's time to roll my own power guesstimator using a Raspberry Pi.

Update: I discovered that because heart rate reacts slower to physical stress it's actually better to set the power display option in Zwift to instant rather than 3 sec avg. This lets the power display react faster and more inline with my actions.
Posted by FRiC at 10:08 AM