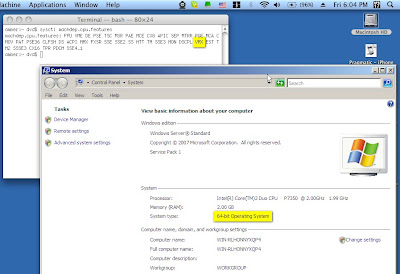 And yes, I should have done research on the P7350 before I bought the MacBook, but all the ThinkPads I've been buying recently have VT-x, and I didn't think a "P" Core 2 Duo and an Apple product could have a missing feature.
Posted by FRiC at 6:04 PM

Sweet man, I thought I'd have to save up for the higher-tier unibody macbook just to get hardware support for virtualization. Good to know the P7350 in the white and base unibody macbooks has that, too.

Oh, and congratulations on your new macbook, I hope you enjoy it. :-)

Do you think is there any chance for them to disable this lattely in a "bad" firmware update or so? (By the way, do you have all the updates installed on Mac OS X?)

It's certainly possible to disable VT-x in a BIOS upgrade. My old ThinkPad Z61t (and I heard some HP's too) got a BIOS upgrade that enabled VT-x a few months after its release.

"It's entirely possible that Apple is using a special P7350 part for the MacBook"
Which it is, I think.