I mentioned going back to Windows Server 2003 R2 earlier, and here I'll talk about why. While testing our Dynamics NAV ERP software under Windows 7 and Windows Server 2008 R2's Remote Desktop Services, I discovered one serious issue.

The "Printer..." button was missing from the Page Setup dialog. The printer selection button is very important since we have different types of pre-printed forms pre-loaded into different dot matrix printers. Since the paper size has to be preset into the printer form page, without the printer selection button, there's absolutely no way we could get custom sized forms to print. As usual, our hopeless ERP implementors were no help, since they have no experience with anything newer than Windows XP. ("Use XP" was what they said.)

After a lot of searching, I discovered here that the printer selection button was deemed obsolete from Windows Vista onwards. There are various workarounds and code samples posted at various places to deal with the problem. However, since I wans't writing my own application but was running Microsoft's own ERP software, the missing button turned out to be critically important, and I was forced to go back to Windows Server 2003 R2. 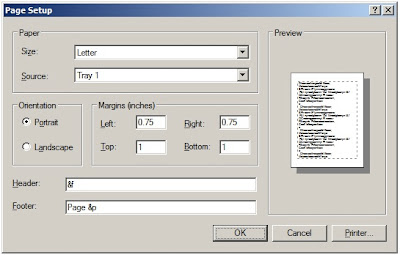 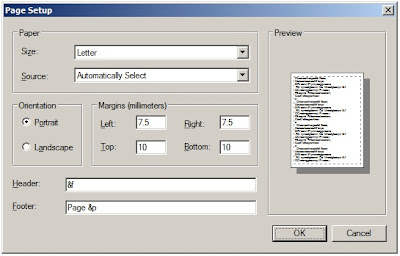 The margins and stuff are different since they're captured from different computers.
Posted by FRiC at 5:10 AM