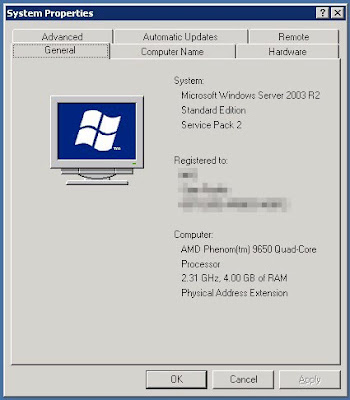 Due to various incompatibilities with our ERP software soon going live, I decided to revert back to using Windows Server 2003 R2's Terminal Services instead of using the far superior Windows Server 2008 R2's Remote Desktop Services and the streamlined RemoteApp functionality.

Since we're going back to Windows Server 2003 R2, I decided to use the 32-bit (x86) version so I can keep the printer drivers in sync with our Windows XP clients. Unfortunately, the 32-bit version only supports 4 GB of RAM, and when I installed 4 GB of RAM, I could only see 3.5 GB.

There are a lot of solutions online to attemp to see 4 GB, such as using the /PAE switch in boot.ini, enabling DEP, and even editing the registry. Unfortunately, none of those things I tried worked. Then it occurred to me, since I can't see the last 512 MB. What happens if I put in more than 4 GB?

There it is. 4 GB of RAM. Windows Task Manager also shows the full 4 GB being accessible. And yes, since this is the Standard Edition of Windows Server 2003 R2, it only supports a maximum of 4 GB, even if I put in 8 GB. (I tried.) 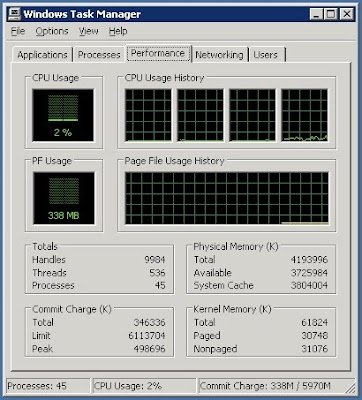 hi.. just dropping by here... have a nice day! http://kantahanan.blogspot.com/