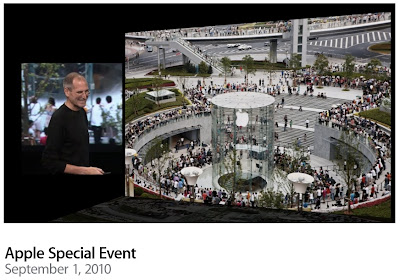 Steve is congratulating himself on all the new Apple stores (Shanghai one in the screen cap above). Bring on the new iPods! 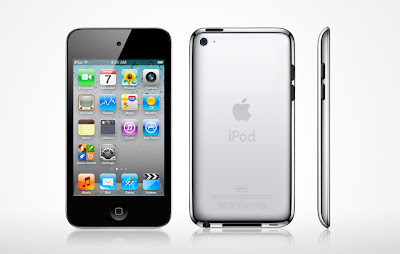 The new iPod touch (4th generation) incorporates all the new features from the iPhone 4 such as the Retina display and gyroscope. More interestingly, it now has front and rear facing cameras, speaker grill, and microphone. These were necessary to enable FaceTime functionality for the iPod touch. The built-in microphone is a really great addition as it will enable applications such as Skype, Shazam, or Voice Recorder to work directly without having to plug in a headset or a microphone.
The rear facing camera is only 960x720 (0.7 megapixels), but that's good enough for video conferencing, and taking HD videos as an added bonus. But I imagine many people will complain that it's not 5 megapixels like the iPhone 4. One thing worries me though, the tech specs doesn't show it as having autofocus, but it's probably unimportant due to the low resolution anyway.
One other surprising thing is the cheapest iPod touch is now $229 instead of $199. But the $229 iPod touch is the 4th generation like the 16 GB and 32 GB models, unlike when the 3rd generation was released, the $199 8 GB model was actually a re-released 2nd generation.
Both the iPod shuffle and iPod nano were also updated, but how much can you really improve an MP3 player?
Posted by FRiC at 12:01 AM