After picking my distributions using VMware, I installed them on my test laptop, a ThinkPad X61. The X61 is an older Penryn Core 2 Duo machine with 2 GB RAM and 80 GB hard drive. It also has Bluetooth, fingerprint reader, but no WWAN and no webcam.

My goal is to have a Linux distribution that supports all of the X61's hardware properly and is easy to configure and use day to day. i.e. as a machine that I can do work with, and ocassionally watch some movies, and not something that I need to continously update in order to get things to work.

I started with openSUSE, which was actually my favorite of my four final choices while testing out with VMware. openSUSE is also special is that it knows it's running inside VMware and automatically installs VMware Tools. openSUSE is the community supported edition of SUSE Linux Enterprise, which is commercially supported by Novell. This is also one of the reasons I'm interested in openSUSE.

For the ThinkPad X61. Out of the box, openSUSE supports trackpoint scrolling, brightness control (without OSD), volume control, Fn-F5 to toggle wireless, and also hold down Fn-F5 to toggle Bluetooth. Unfortunately, for some reason Wi-Fi didn't work out of the box, after some trying, I restarted networking by issuing the command /sbin/rcnetwork restart which started thing up, and after that it just worked, even after reboots. I have no idea why it didn't work the first time.

openSUSE doesn't have any non-free software installed by default or even enabled, so I had to first add the contrib repo and restricted formats repo (for playing videos). 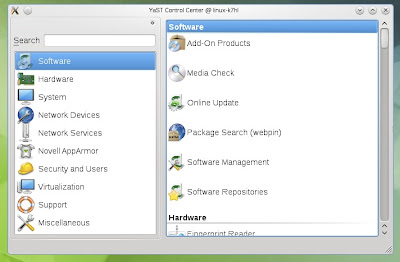 Also due to licensing issues, openSUSE doesn't have subpixel smoothing installed by default, so I had to add the subpixel repo and enable it. Strangely enough, I noticed that the Gnome edition of openSUSE does have subpixel smoothing already included and enabled. Unfortunately, with either the KDE or Gnome editions, having subpixel hinting enabled didn't mean that it automatically works with all applications without some hacking.

Aside from subpixel smoothing, openSUSE seems to work perfectly at this point, except the KNetworkManager would randomly segfault. I was about to attempt to get APS to work (see below) when it froze and hung the entire OS (thought this wasn't possible with Linux, but people also say the same thing about OS X and I've had OS X freeze up more times than I could count). When I rebooted, KNetworkManager kept segfaulting non-stop and the network kept going down, so I decided to give up and installed my next favorite: Fedora.

Fedora for some reason can't find my external USB DVD drive when installing from the install DVD. So I had to install using the Live CD. 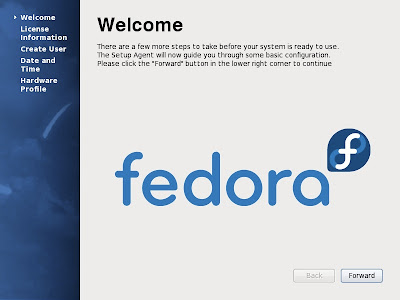 Out of the box, volume and brightness OSD work, and Fn-F5 toggles Wi-Fi and Bluetooth.


Subpixel hinting is available in Fedora, but disabled by default. Go to System -> Preferences -> Appearance -> Fonts to enable it.
One surprise in Fedora is that iBus is already installed and enabled by default. This is really helpful for non-English users since there's no need to figure out how to install iBus and an input method. 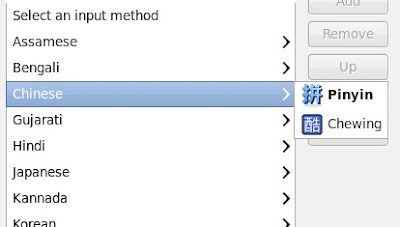 Unfortunately, when I tried to play a movie, Fedora automatically offered to install the appropriate codecs for me, but no matter what I did, the installation always fails and I couldn't get any videos to play, since attempting to play would just bring back the failed to install package error again. 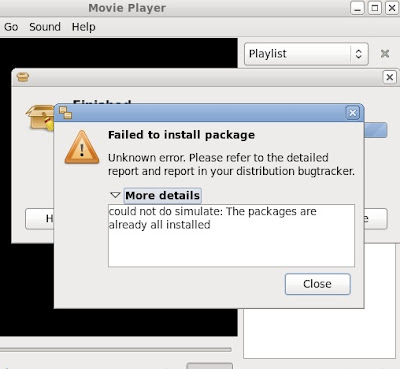 Unlike openSUSE, trackpoint scrolling wasn't available by default. I had to install gpointing (from the repo) to enable it. Trackpoint sensitivity can be configured after installing configure-trackpoint. No problems here.

Active Protection System turned out to be really difficult. APS is what ThinkPad calls their hard drive protection system that automatically parks the drive head when a vibration is detected. Normally Linux needs tp_smapi to read the vibration sensor, and hdapsd to read the output from tp_smapi and do the actual parking.

For Fedora, hdapsd is already included in the standard repo, but tp_smapi was nowhere to be found. I eventually found a site that has tp_smapi pre-compiled but there were four different ones available for download with no documentation whatsoever, and none of them worked. Google turned up nothing helpful.

So at this point, I gave up and installed the next in list, Ubuntu.