This is one of those rare times that we got a new product ahead of many parts of the world. This S10 is bought in the stores, it's not a demo, review, or pre-production unit.

The black S10 and the included leather slipcase. 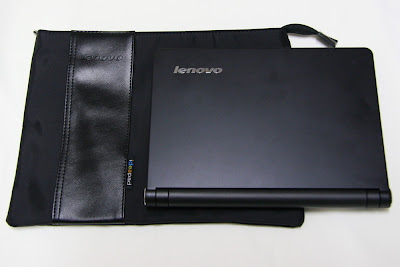 The back of the screen is a smooth matte. Fingerprints are not very visible unlike the other color variations. (Fingerprints were not wiped clean prior to taking these photographs.) 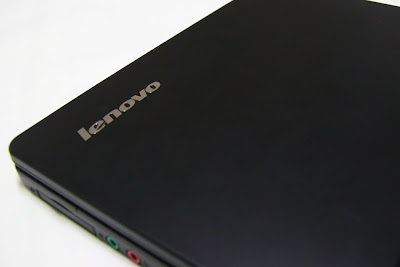 Size comparison with the ASUS EEE PC 701 and an old ThinkOutside Stowaway Keyboard. I feel the S10's keyboard is very similar to the Stowaway, both in size and feeling. I also feel it's superior to the ASUS EEE PC 1000 series. I have no problem touch typing on the S10, and I'm a very fast typist. 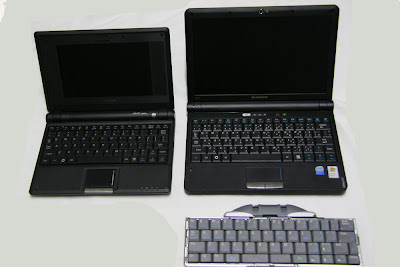 The blue light is the power light. The orange light is the multi-purpose wireless indicator. It blinks blue for Wi-Fi activity, orange (as shown) for Bluetooth, or purple if both Wi-Fi and Bluetooth are active. 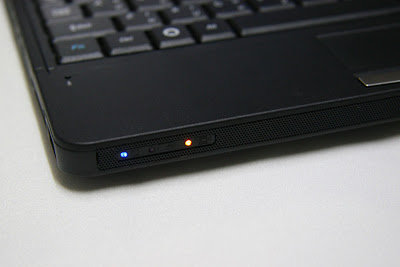 The SD card sticks out even when fully inserted, so you can't just leave an SD card inside. But this is not a problem since the S10 has a large hard drive. The SD card shown is an A-DATA 16 GB Turbo SDHC card that I normally leave inside my EEE PC 701. 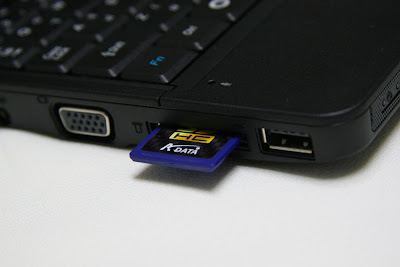 The S10 has a very bright and colorful screen. Shown here the T60 is at maximum brightness, running on battery power (screen auto dimming enabled). The S10 is at half brightness. 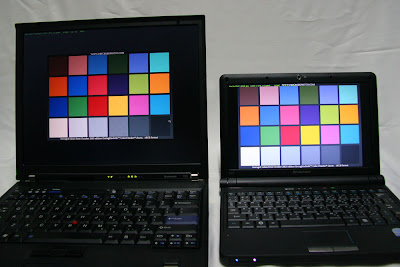 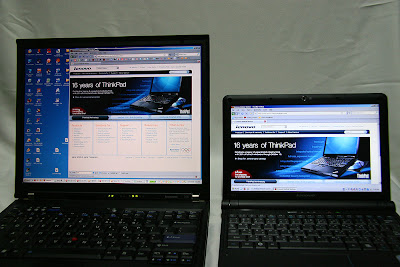 The only problem I have with my S10 is that the LAN port is extremely tight. But it's probably just my unit. Even if it's a problem with every unit it won't be an issue for most people anyway since most people will only use the wireless connectivity.

I've only had the S10 for a day and I get about 2.5 hours of usage in my limited testing. This is with the wireless enabled, browsing the web, and just doing random stuff. The S10 is very energy efficient since if it's left idle for a moment, the battery indicator will show that it has 3+ hours of battery life left. The battery remaining indicator changes dynamically as the usage pattern changes.

There is a shortcut key (Fn-ESC) to toggle the webcam, but no shotcut key to mute the speakers. The shortcut keys for screen brightness and volume are placed with the cursor keys. They should've been put elsewhere and the cursor keys should have been combined with Home, End, PgUp, and PgDn.

If you have any questions feel free to leave a comment or e-mail me.

Where did you buy it from that you got a black sleeve? AFAIK none of them (in the US) have come with one.

Hi, my S10 is bought locally (Thailand). They all come with color matching sleeves.

The orange light is the multi-purpose wireless indicator. It blinks blue for Wi-Fi activity, orange (as shown) for Bluetooth, or purple if both Wi-Fi and Bluetooth are active.

Hello! what if the wireless/bluetooth indicator blinks red? do you happen to know what this means?

thanks for the reply.:) i am trying to compare my observations from other S10 users... I am worried about the wireless light, it looks red to me even while i am both using wi-fi & bluetooth. this is the first time that this happened...

And by the way, have you tried charging your battery fully and then getting only 99% batt power?

I'm tempted by the Ideapad. Just a bit put off from having an R60e which has lost its battery from a fault. Lenovo customer support .. or lack of it is awful.