Couple of weeks ago I was looking for a simple backup solution and saw that Buffalo now has the TeraStation Pro II Rackmount available locally. The base model (1 terabyte) wasn't that expensive, but prices increased exponentially for the models with more storage, and the top model was 4 TB.

After some googling, I found that the drives can be replaced with your own without much difficulty if there's no data on the drives. I did some calculations and noticed that if I get the 1 TB model and four 500 GB drives, the cost is exactly the same as buying the 2 TB model. So it would be like buying the 2 TB model, and getting four 250 GB hard drives for free! So I immediately placed an order for two TeraStations, and eight 500 GB drives.

The drive replacement process was simple. The drives were mounted in rails that can be pulled out without any tools, so I replaced the drives one by one, and after each drive replacement, I booted up the TeraStations and let it detect each new drive. After all drives have been replaced (4 reboots per TS), just rebuild the RAID. I would've had to rebuild the RAID anyway, since the 1 TB model came as RAID0 by default, and I wanted to use RAID5. (A friend had bought a 2 TB model, and the 2 TB model came pre-configured as RAID5 by default.)

Unfortunately, when it was time to put the new drives into the TeraStations, I noticed the screws locking the drives into the drive trays have little tamper-proof warranty stickers on them.

Looks like my TeraStations won't be warrantied for three years.

The Samsung drives pulled from the two TeraStations. 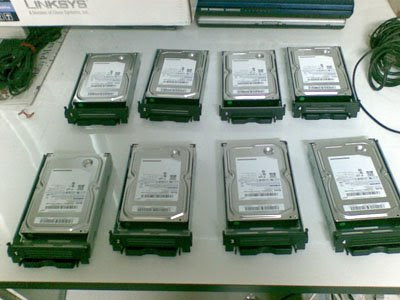 Building the RAID after installing the new Western Digital drives. 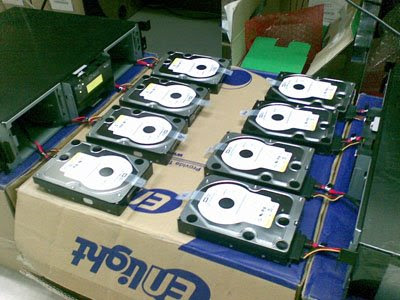