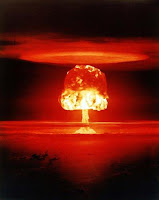 Last Friday (July 25) was System Administrator Appreciation Day (SysAdminDay). No one showed up to give me any presents or called me up to thank me, and it completely slipped my mind too until early this morning.

Let me see, last Friday some user's computer got infected by a virus that could not be cleaned unless the hard drive is connected to a clean computer and scanned from that computer. Another user's monitor was having problems and sent in a request for a new monitor which we didn't have on hand. The company's inkjet printers are using way too much ink and I had to figure out a plan to reduce ink usage. A programmer's Visual Basic suddenly failed and I helped him fix it. The CCTV system crashed and I had to fix that. The 1.5 Terabyte Buffalo TeraStation used for backups ran out of disk space because the backup software keeps crashing so it keeps doing full backups instead of incremental backups. The SOX consultants requested a complete list of all programs developed by our programmers. Boss wanted to burn some CD's but can't remember which program to use. Someone called me up to do a telephone survey about our network infrastructure and I had to spell out Google and Cisco for her. Right after that the local Kerio Winroute Firewall dealer called me up to remind me that my subscription is expiring. A friend dropped her notebook by accident and the screen cracked and wanted my advice about buying a new notebook. (We made an appointment and went out to buy it on Sunday.) Another friend wanted to have a website redone and I went to check out the website and turned out it was infected by an iframe virus. Another friend was starting a web business and wanted to know about link exchange and SEO. Yet another friend was having problems with her company's Internet link and I had to talk to their service provider about it. Still another friend was installing Windows XP on his Acer notebook and was having problems with the display driver. The driver turned out to be corrupted on many Acer sites and I managed to find an uncorrupted copy on the Chinese Acer site. My domain controller had been having an issue where every single day after 5 PM and before 8 AM the server's dual port LAN card would stop working as a team and then the server would complain about duplicate IP on the LAN. Since the problem only happens after 5, I worked late trying to fix it. (It's still unfixed.)

In other words, a completely typical day.
Posted by FRiC at 6:28 AM