So, I've used the IdeaPad S10 extensively in the past week. Here are some additional thoughts. Some of the items are expande from my two previous posts.

The battery isn't that bad. Like I've already mentioned, battery life will keep going up as the battery is conditioned. I can easily get 3.5 hours of battery life now. I also have the LAN disabled since I never use LAN. Unfortunately it still can't compare to the Aspire One's 6-cell battery. A friend bought an Acer Aspire One ("A1") a few days ago, and it can easily get 5 hours of battery life, even on the very first charge. But then my ThinkPad T60 with the standard 6-cell battery gets less than two hours of life, so I'm happy.

The PgUp and PgDn keys are really badly done. Eventhough they have their own keys which sounds nice in theory, but in actual use, the keys are located in an awkward position, are too small, and I have to reach for them. It would have been really nice if they were put together with the cursor keys and accessed using the Fn key combination, like on the EEE PC. The cursor keys are full-sized, which means the right shift key has to be shifted to the right. The A1 has a standard right shift key, but then the arrow keys are tiny.

The Ctrl and Fn keys might be a problem for non-ThinkPad users, because the Fn key is on the outside/left, and Ctrl is on the inside/right. This is identical to the setup on ThinkPads, but opposite to other brands. Because my regular notebook is a ThinkPad T60, I have no problems. (And I do keep pushing the wrong key on the EEE PC.)

The keyboard is really really nice. I'm a fast typist (120+ WPM) and I can type at my regular speed on the S10. But then I can also type very fast on the EEE PC 701. (This post is typed on the EEE PC 701.) On comparison with the Aspire One, the A1's keyboard looks and feels nicer since it has sculpted keys that look more like the keys on a regular keyboard, while the S10's keys look flattened. But the flattened keys actually give the keys more surface area, so they feel better when typing.

My S10 has Bluetooth. The Aspire One that my friend has doesn't. My EEE PC 701 was first generation and doesn't have Bluetooth. There's nothing special about the Bluetooth, it just works.

I read that others have issues with the S10's heat output. But it doesn't feel any hotter than my EEE PC, and it's just like the A1. Maybe this is because I live in an air-conditioned country.

I also installed Windows XP Pro SP3 from scratch on the S10, using a standard Lenovo USB-powered external DVD-R drive. The exact name of this wonderful drive is USB 2.0 Super Multi-Burner Drive with LightScribe, and the part number is 41N5629. I also used the same drive to install XP Pro on my EEE PC 701. There was no need to change the SATA mode in the BIOS from AHCI to IDE prior to installation. However, I also tried using a standard SATA DVD-R drive with a cheap SATA to USB converter. But the S10 couldn't detect this combo during the boot process, eventhough it worked fine once Windows is booted.

IdeaPad S10, Acer Aspire One, and ASUS EEE PC 701. Sorry for the mess in the background. 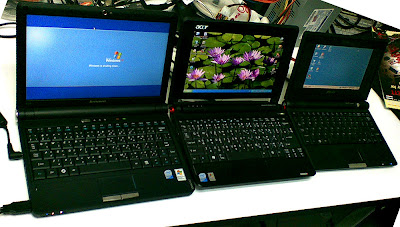 IdeaPad S10 with the Lenovo USB drive. I took this picture while XP was installing, but I noticed later I happened to take the shot when it was rebooting, so the screen is blank. The drive does not need any additional power to work with either the S10 or the EEE PC. 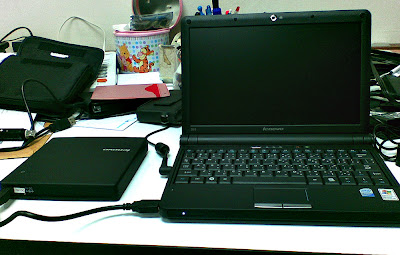 Pictures of the Bluetooth module. Taken from mobile01.com.

P.S. Sorry for the quality of the photos in this post, at least compared to the previous post. I really need to get a pocket camera.
Posted by FRiC at 11:00 AM

could you upgrade to xp pro on the s10 from a usb drive with xp pro files on it? instead of using an external cd?
gerald.pauler@gmail.com

The PgUp and PgDn keys are really badly done. Eventhough they have their own keys which sounds nice in theory, but in actual use, the keys are located in an awkward position, are too small, and I have to reach for them.

Hi there, I've been remapping the Right-Alt and Application keys on my S10 to Page Up and Page Down, respectively, using this SharpKeys utility. You can remap virtually any key on your keyboard to another.

Hey, I was wondering if it has a synaptics touchpad? If it is synaptics (you can check in the device mgr) do you know if it is dual-touch capable?

But how do I tell if it's dual-touch capable?