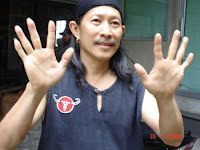 Turns out it wasn't a problem for me after all, since Buffalo just released new firmware updates across the line to resolve this issue. Buffalo Technology has websites all over the world and they recommend you only download firmware from your local site, and the files at each site are subtly different, so you should probably pick the right one. The new firmware is version 1.33 and the www.buffalo-asia.com site has release notes that can be viewed directly. (I have the TeraStation PRO II Rackmount TS-RHTGL/R5, you should pick the right one for your Buffalo.)

The update went differently this time than before. After TSUpdater performed the firmware transfer, instead of rebooting, my TeraStation shut down and TSUpdater complained that the TeraStation can not be found. That scared me for a second since my TeraStations are long out of warranty. But after manually powering up the TeraStation, the firmware update proceeded to do its job and everything was well.
Posted by FRiC at 7:18 AM