Turn off fridge to begin 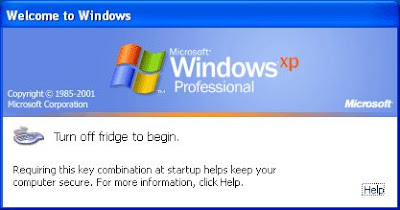 Recently, someone called me up to go check out their system since they were having a strange problem logging into the domain: some users can only login to the domain if they first turn off the refrigerator. Every time these users turned on their computers, they need to turn off the fridge, login, then turn on the fridge again. (?!?!) It's normally not a problem, but the fridge got fried several times from being tuned off and on so much.

When I arrived at the site, I sat down at one of the problem users' computer and wondered immediately why their domain name ends in 0. (The domain name was their company name + "0".) It seemed weird to give such a name to the domain, I figured maybe eventually they wanted to expand to have more than one domain, so they started out with 0.

Oh, and the reason why they were having trouble logging into the domain? Apparently the original sysadmin randomly deleted users from the domain before he quit the job. So the users whose names got deleted could no longer login to the domain. And the power switch next to the refrigerator provides power to both the fridge and to one of their network switches. When the network switch is powered off, the users could login to the domain through locally cached domain passwords. How did they ever figure out to turn off that particular switch? One of the guys there told me that he thought maybe the fridge was interfering with their network, so he tried turning it off, and it helped, so they've been doing that ever since. (?!?!)

And what happened to the original sysadmin with the wonderful sense of humor for naming the domain after the domain controller and for randomly deleting users? Apparently he left the company and joined a high profile IT security and consulting firm. I'll remember to never hire any IT consultants locally, ever.
Posted by FRiC at 7:10 AM