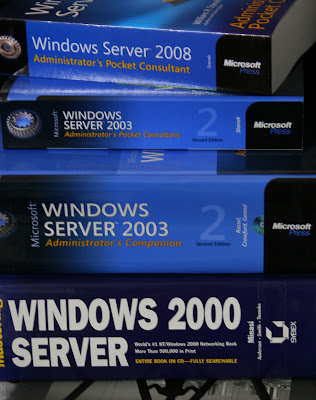 I've long been a fan of William Stanek's technical books. (Can one really be a "fan" of technical books?) Unfortunately, I've never actually owned any of his books until not long ago, only recommended them to others.

Late last year, my company embarked on a huge and expensive project to replace our aging ERP system with a new one, so I decided to take the opportunity to also replace our slightly aging servers running Windows 2000 Server with new servers with Windows Server 2003 R2 x64. I didn't actually have any extensive hand-on experiences with Server 2003 at the time, so I took the opportunity and ordered Windows Server 2003 Administrator's Companion (2nd Edition) and Stanek's Windows Server 2003 Administrator's Pocket Consultant (2nd Edition). The bookstore only had the 1st Edition of Stanek's book, so I placed an order and it took them three months to get the 2nd Edition in.

One word about the aging ERP system. We've been using it for years. It's running on the Windows 2000 Server, but it was moved from the older servers running Windows NT Server 4.0. It never worked properly inside Windows 2000 since I think it was really designed for LAN Manager, and the client only runs inside Windows 98. Both the server side application and the client side software are full of bugs and require constant maintenance. Our users have to run VMware Player to run Windows 98 to access the ERP software. It's a piece of crap that's long overdue for an upgrade. The ERP system was also the reason I stuck with Windows 2000 Server. It was a pain to get working with 2000, and it didn't work with x64 at all. (But the reason this is so is because we never upgraded to a newer version that supported modern operating systems.)

Actually, when spec'ing out the new servers, I wanted to go with the then newly announced Windows Server 2008 (previously known as Windows Server Codename "Longhorn"), but since we already had unused licenses for Windows Server 2003, my boss didn't want to spend any more money for licenses, plus 2008 wasn't actually released yet at the time, so I figured 2003 R2 was good enough, and we could upgrade to 2008 in the future, like when SP1 comes out or something.

Unfortunately, our ERP project got incredibly delayed due to unforseeable circumstances, and the new servers I put together for the ERP software were just sitting there gathering dust while I studied the documentation and did test runs. In hindsight, I should have put the servers into production use right then, but I wanted to start fresh all at once, but of course I didn't realize at the time how much the ERP project would be delayed.

Fast forward to last month, and my dust gathering servers silently passed their 1st birthday, still unused, and suddenly my boss walked into my office and told me to go ahead and present a budget to him to upgrade to Windows Server 2008.

My unused Windows Server 2003 licenses and books! Eventhough I've studied the books extensively, it's not like they were actually put into any kind of "production use". But of course I took the opportunity this time to buy Stanek's Windows Server 2008 Administrator's Pocket Consultant

, as well as put in an order for Windows Server 2008 Inside Out