Besides computers, my other passion in life is photography. I first got interested in photography by random chance when the college that I went to study computer science at also turned out to be one of the most respected photography schools in the world. Unfortunately most of the photo majors I encountered at the time were equipment snobs and I never learned anything, but I could see that if I ever got the chance, photography was something that I really wanted to learn more about.

When I got to know my girlfriend (now wife), it was also random chance that her dad (now my father-in-law) is a professional photographer. I told him that I went to a photography school but learned zilch. He jumped at the chance to teach me, so I learned about films and apertures and shutter speeds and composition by using his Nikon FM2.

Soon afterwards I managed to buy my own FM2 from some kid who said she was switching majors and was trying to sell her camera to an equipment dealer. The dealer gave her a really bad price when I just happened to walk by, so I immediately offered her a higher price and bought the whole set off her. 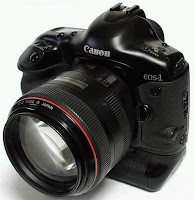 The Nikon FM2 went everywhere with me, but soon film processing costs started to eat into my pockets. So in 2005 when digital SLR's started to come down in price, I bought a Nikon D70. Unfortunately, I was never really happy with the D70's picture quality

A few months later, my father-in-law (I got married!) got a Canon EOS 1V to take advantage of faster shooting speeds (10 fps with the motor) and Canon's far more extensive lens selection. Around the same time, someone wanted to buy my Nikon D70 so I jumped at the chance and sold the Nikon kit and bought a Canon EOS 30D with a really nice 17-40L lens.

Within days after I got my 30D, my father-in-law's 1V and 28-70L lens got damaged in an accident so he bought a 5D and 24-70L to replace them. So we both switched from Nikon to Canon and went digital at the same time within a short period of time. Eventually, I ended up teaching him about changing ISO's and compact flash cards and burning photos onto CD's. (We're both JPEG shooters.)

A few weeks later when we got a chance to meet, I found out more about how his 1V was damaged. The 28-70L lens was mounted on the 1V at a shoot, and the equipment handling guy didn't secure the hardware properly and everything fell from the equipment truck, and the 1V got impacted right where the camera body joined the lens. The lens got broken in half near the mount, and the camera's mount was damaged beyond repair according to his Canon service center.

Since he had already bought the 5D and a new 24-70L lens to replace the 1V set, I took the damaged camera and lens to my Canon service center to see if they could do anything about being beyond repair.

My Canon service center fixed the 1V for free, and gave me a brand new 24-70L lens.

I tried to hide the 1V and the new lens from my father-in-law, but he found out about it so I had to give him my new 17-40L lens in exchange for the much more expensive 24-70L lens, plus I had to give the 1V back to him too.

Of course, we still have our collection of old bodies and lenses, but it's no longer easy to find labs that can handle film properly. We would sometimes take the old FM2 out and shoot a roll, but more megapixels is where the world is headed to.
Posted by FRiC at 10:50 PM