I went to see the Traces of Siamese Smile art show at the Bangkok Art and Cultural Center^H^Hre in downtown Bangkok. Took me a while to find the website since they used a British spelling for the name.

The exhibition officially started at 7 PM yesterday. I had to walk to the exhibition center since traffic was at a complete standstill. When I arrived at the center I found out that the roads were closed because a member of the Royal Family was there to officially open the exhibition to the public.

Most of the art work was way over my head, but there's one that really stood out for me. It's an imaginary map of how the transportation system of Bangkok should have been, if everything had happened as the government had promised. 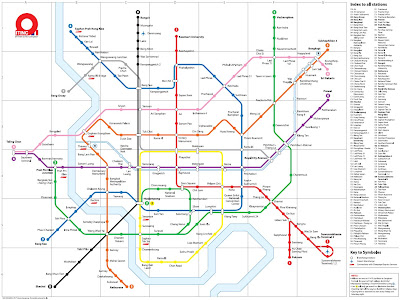 And this is how the current BTS (elevated train) and MRTA (subway) map looks like. (Not to scale of the ITINC map above.)

Don't let the image fool you. The Suvarnabhumi Airport Rail Link (red line a.k.a. SARL) and the Sukhumvit (dark green) line extention to Bearing won't be completed in another few years. The last two stations on the Silom (light green) line have been completed since 2004 or so but has not yet been opened for use. They're just sitting there gathering rust.

Oh wait, if you thought the BTS and MRTA are ridiculous, wait until you read about the stillborn BRT (Bus Rapid Transit) system.
Posted by FRiC at 1:01 PM