There is no Internet 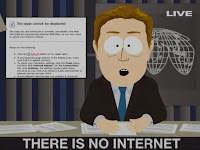 One day last week we lost all Internet connectivity. All phones in my office rang simultaneously and angry users started pouring into the computer room.

I called my ISP and they said all Internet is down in my area. They're already working on the problem and will send me an SMS when the problem is fixed, but I should notice it anyway when my connectivity is restored. A few moments later, my boss stormed into the computer room and yelled at us to fix the Internet.

The Internet eventually got fixed about four hours later, and the ISP sent a message on my phone the next morning to inform me that's it's fixed.

Afterwards though, I noticed that a lot of websites are no longer updated. I know that due to Internet censorship here in Thailand, a huge number of websites are blocked from being accessed. But the new blocking works as if the websites are now frozen in time, and all data are being pulled from the caching proxy instead of from the actual website.

It's probably related to the web censorship that happened last week.
Posted by FRiC at 10:30 AM