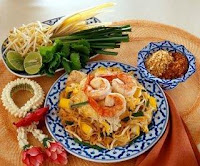 Watching the PAD protests on the streets of Bangkok is like watching the world's largest soap opera, except it's all happening in real life.

PAD apparently stands for People's Alliance for Democracy, I tried searching for PAD on the net but couldn't find anything useful. There are supposedly official websites and forums, but they're filled with pop-up ads and iframe viruses, which makes their official status somewhat questionable. I did get a lot of hits for Pad Thai though.
Posted by FRiC at 6:45 AM