Since my NSLU2 + CUPS experiment earlier turned out to be so successful. I decided to get a whole bunch of NSLU2's to be used as print servers and for playing around with. One of my HP JetDirect cards happened to fail while I was experimenting CUPS so it was all good timing.

Unfortunately, when I went back to my network shop, they told me that they only had two NSLU2's. I had bought one earlier, and they had the last one and there will be no more, ever. They even claimed that the two they had were leftover stocks from years ago.

Of course I knew they were lying, since I had been trying to buy the NSLU2 locally for years and was never able to find them. In fact, when the Linksys NAS200 was released locally it was sold as Linksys' first network storage device. (I also have the NAS200, but it was disappointing, both in performance and functionality. I'll talk about the NAS200 another time.)

One of my NSLU2's with a 2 GB Kingston DataTraveler Mini Slim sticking out the back. 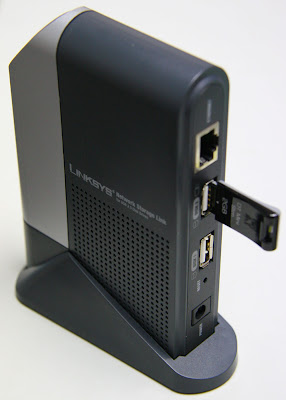