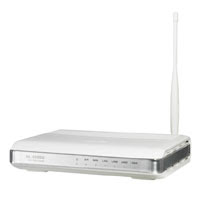 I want to take back all the bad things I ever said about p910nd in the past.

Since I could no longer get the NSLU2 and I really needed to buy print servers, I decided I'll give p910nd one more try. I realize I could use CUPS with OpenWRT, but to run CUPS, I need two USB ports (one for spooling and one for the printer itself), plus the real reason is I have little experience with OpenWRT.

So I went out and finally bought a ASUS WL-520gU. The reason I went with the WL-520gU is because it's really cheap so if I couldn't get printer sharing to work, at least I could use it as a spare wireless router. The WL-520gU works with either Oleg's firmware or DD-WRT, both of which have built-in printing support via p910nd, but I decided to try Oleg's firmware first because it's written with ASUS routers in mind.

So after powering it up the WL-520gU for the first time I immediately loaded it with Oleg's firmware, and plugged in my printer. I set up IPP printing and tried a test page, and garbage came out.

After changing to the right printer driver it worked beautifully. This is nothing like the bad experiences I had with the countless other USB print servers I've tried before. I've searched for a good USB print server for a long time and was never able to find one, so I've always bought printers with built-in LAN ports. The final straw was the Linksys PSUS4 that was recommended by my network dealer, was really expensive, and stupidly enough didn't work with any printers I have. That's why I was so excited with the NSLU2 + CUPS earlier, because CUPS worked so perfectly.

But I'm so happy that the WL-520gU + p910nd combo also works perfectly. I used it in production conditions with multiple LAN users printing from different operating systems, tested it with paper out conditions, as well as continuously sending print jobs while the printer is in offline or error conditions. It all works perfectly. Surprisingly enough, I also tried enabling autopower on my printers, and it handles the autopower on and off perfectly as well.
Posted by FRiC at 7:09 AM